Many, if not most readiness monitors and self-diagnostic tests on modern applications require that the engine be shut off for a predetermined time after a drive cycle is completed before those monitors and tests can run  the next time the engine is started. To measure this time interval, the PCM uses a built-in timer that comes into operation when the PCM no longer detects signals from sensors such as the Crankshaft Position Sensor, Fuel Pressure Sensor, and Ignition Control Module, among several others, depending on the application.

Thus, should a malfunction such as, for instance, a short circuit to battery positive occur in any circuit the PCM uses to determine whether the engine had been shut off, the PCM will deem the engine not to have been shut off, which means that the engine off timer will not start to run. In practical terms, this means that the last drive cycle will not be “marked” as complete, which in turn, means that when the engine is started again, some, or no self tests or readiness monitors will run or complete, and code P2610 will set and a warning light may be illuminated.

However, note that code P2610 may not set on the first failure and that on some applications, more than one consecutive failure must occur before the code will set. Also be aware that code P2610 does NOT indicate in which system the fault is present; all this code does is indicate that a fault had occurred, and that the fault is preventing the engine off timer from starting.

The image below shows a much-simplified schematic diagram of a typical engine off timer circuit. Note that in this example, both the ignition and fuel injection circuits are shown to be deactivated; if either system was active, the PCM will recognize that fact and since it is receiving signals from the active system, it will not deem the engine to have been shut off, which in turn, will prevent the engine off timer from starting. 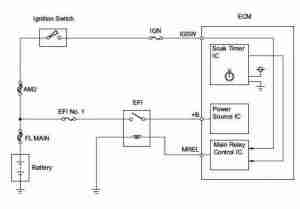 What are the common causes of code P2610?

Common causes of code P2610 could include the following-

Some common symptoms of code P2610 could include the following-

How do you troubleshoot code P2610?

SPECIAL NOTES: Non-professional mechanics should take note that the setting parameters for code P2610 varies greatly between manufacturers, and even between models in a given model range. For this reason, non-professional mechanics are strongly urged to read the section in the affected application’s manual before attempting a diagnosis of this code. Failure to gain at least a working knowledge of how the engine off timer system works, but more importantly, how the various subsystems that are involved interact with each other will almost certainly result in a misdiagnosis, wasted time, and quite possibly, severe or fatal damage to the applications’ electrical system and control modules.

Additionally, be aware that some faults that can cause this code to set can occur in the CAN (Controller Area Network) bus system. Faults in the CAN bus system can generally not be diagnosed with cheap, generic code readers, which means that if the few generic diagnostic and repair steps outlined below do not resolve the problem, the better option is to refer the application to the dealer or other competent repair shop for professional diagnosis and repair. END OF SPECIAL NOTES.

NOTE: Pay particular attention to other codes that may be present along with P2610, and especially to codes (both active and pending) that relate to the Crankshaft Position Sensor and its control circuit. Failures of this sensor and/or its control circuit are a common cause of code P2610, so if such codes are present, be sure to resolve them in the order in which they were stored before attempting a diagnosis of P2610, since doing this may resolve P2610 as well.

Assuming that there are no other codes are present, resist the temptation to start testing circuits and components in a willy-nilly fashion, which may accomplish nothing more than waste time and effort.

In many cases, code P2610 sets as the result of a known software vulnerability for which a patch or cure may be available from the dealer- if such a remedy is available, have it installed to see if it resolves the problem before continuing the diagnostic procedure.

If a software update does not resolve the problem, refer to the manual for the application to determine exactly which systems are used by the PCM to determine if the engine is shut off. Also use this opportunity to identify and locate all relevant parts and sensors, as well as the function, routing, and color-coding of all associated wiring and/or connectors.

Once all relevant systems and wiring are properly identified, perform a thorough visual inspection of all associated wiring, starting with the Crankshaft Position Sensor and its control circuit.  Look for damaged, burnt, shorted, disconnected, or corroded wiring and/or connectors. Make repairs as required, clear all codes, and operate the vehicle for at last one complete drive cycle to see if the code returns.

If the code persists but there is no visible damage to wiring, prepare to perform resistance, ground continuity to battery negative, continuity, and reference voltage on all wiring associated with the Crankshaft Position Sensor. This step must also include testing of the Crankshaft Position Sensor s per the instructions provided in the manual, since the sensor forms part of its control circuit. Compare all obtained readings with the values stated in the manual and make repairs or replace wiring and parts as required to ensure that all electrical values fall within the ranges specified by the manufacturer.

Clear all codes after repairs are complete, and operate the vehicle for at last one complete drive cycle to see if the code returns.

NOTE: Be sure to disconnect the sensor and circuit undergoing testing from the PCM and other controllers during resistance and continuity testing to prevent damage to control modules.

If the Crankshaft Position Sensor and its control circuit check out but the code persists, repeat the tests and checks described in Step 4 on all other implicated systems and sensors until it is certain that all wiring and sensors either conform to specifications, or the problem is found and repaired.

WARNING: Be aware that Step 5 can take several hours, and involve testing dozens of individual circuits, connections/connectors, and components. This process can be challenging even for professional mechanics, so if there is any doubt about your diagnostic skills and/or ability to perform these tests successfully, the better option is to play it safe and refer the vehicle to the dealer or other competent repair facility for professional diagnosis and repair.

In the event that Steps 1 through 5 does not resolve code P2610, suspect either a defective PCM, or a software failure that cannot be fixed with a simple patch or update. However, resist the temptation to condemn the PCM out of hand, since a complete reprogramming of the PCM may resolve the issue reliably.

However, reprogramming of this kind (or replacement of a PCM) is best left to the dealer or other competent repair shop that has access to the required equipment, the latest software updates for the application, and the ability to verify that the reprogramming or replacement had been completed successfully.

Just wanted to say that this site and its information was exact and much more informative than most any other site. you can tell that there are some real professionals behind this info. I had a problem with my Santa Fe and figured it to be related the the Crankshaft Position sensor when i received the P2610 error code. Without ever having been to this site, I removed the sensor, cleaned all the metal debris that was clinging onto the magnet, and reinstalled it. Easy temporary fix and this site helped reaffirm my assumption in the faulty area.