In terms of operation, the turbo boost control sensor converts the turbo chargers’ boost pressure into an electrical signal, which signal the PCM uses to calculate appropriate fuel delivery and ignition timing strategies based on the boost pressure being developed. In practice, the PCM uses this signal to “fine-tune” the level of boost pressure that is required by the engine at any given moment. Thus, the function of the turbo boost control sensor is to prevent over boost conditions that can seriously damage the engine, as well as under boost conditions that have serious negative effects on engine power.

However, for the boost control system to work as intended the PCM has to “know” whether (or not, as the case may be), the mechanism that controls the actual boost pressure is functional. This mechanism goes by many names, including “wastegate”, “dump valve”, and others, but in all cases, this mechanism is fitted with a position sensor whose function is to relay the position of the mechanism to the PCM.

In practice, variable geometry turbochargers regulate the boost pressure they develop by varying either the position or angle of the vanes on the turbine wheel, so in these designs, the function of the boost control position sensor is critical to the correct operation of the turbocharger.

Regardless of the turbo chargers’ design, though, the PCM has to be able to exert precise control over the actual boost pressure being developed to ensure that the engine performs at its peak at all times. As mentioned elsewhere, excessive boost pressure can damage the engine, while insufficient boost pressure reduces engine performance, so when the PCM detects an intermittent failure in the boost control valve’s position sensor, it will recognize that it cannot control the boost pressure effectively. When this happens, the PCM will set code P2566, and also illuminate a warning light because this failure has the potential to increase harmful exhaust emissions.

Where is the P2566 sensor located? 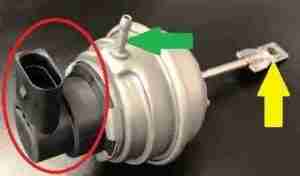 What are the common causes of code P2566?

Common causes of code P2563 could include the following-

Common symptoms of code P2563 could include the following-