In terms of operation, the TBCPS (The Turbo Boost Control Position Sensor) converts the turbo chargers’ boost pressure into an electrical signal, which signal the PCM uses both to calculate appropriate fuel delivery and ignition timing strategies based on the boost pressure being developed, and to “fine-tune” the level of boost pressure that is required by the engine at any given moment. The latter function of the TBCPS is to prevent over boost conditions that can seriously damage the engine, as well as under boost conditions that have serious negative effects on engine power.

From  the above it should be obvious that the correct operation the TBCPS and its associated electrical control circuit   is essential to the efficient operation of the turbo charger, which will produce boost pressure for as long as the engine is producing exhaust gas to drive the turbo chargers’  turbine wheel. Thus, when the PCM detects a signal from the TBCPS that is either higher or lower than expected given the current operating conditions, it recognizes that it can no longer control boost pressure effectively, and it will set code P2563 and illuminate a warning light as a result.

The image below shows a typical Turbo Charger Boost Control Position Sensor from a Hyundai application. Note however that the appearance and location of Turbo Charger Boost Control Position Sensors vary greatly between applications- from being directly mounted on the turbo charger casing, to being mounted on the inlet manifold. Always consult the repair manual for the affected application to locate and identify all components correctly to avoid misdiagnoses, wasted time, and the possible unnecessary replacement of parts and components. 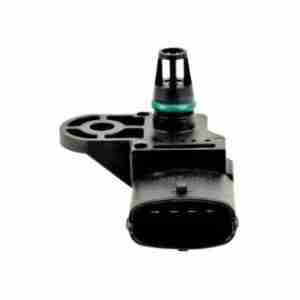 What are the common causes of code P2563?

Common causes of code P2563 could include the following-

Common symptoms of code P2563 could include the following-

How do you troubleshoot code P2563?

NOTE #1: Non-professional mechanics should take note that the signal voltage from the TBCPS is also checked by the PCM when the ignition is switched on, but the engine is not running (KOEO). In practice, this means that since a stationary turbo charger cannot produce boost pressure, it is entirely possible that the code could have set as the result of excessively high exhaust back pressure caused by clogged mufflers and/or catalytic converters, or restrictions in the inlet tract during the previous drive cycle. These are relatively common causes of code P2563 on older vehicles, so have the exhaust system inspected first before replacing any major components if the diagnostic/repair steps below do not resolve the problem.

Refer to the manual to locate and identify the TBCPS, as well as its associated wiring. Also determine the color-coding, routing, and function of all related wiring all the way up to the PCM, since it may be necessary to test the reference voltage being delivered by the PCM.

Perform a thorough visual inspection of all related wiring and connectors. Look for damaged, burnt, shorted, disconnected, or corroded wiring and/or connectors. If the TBCPS is located on or near the turbo charger, pay particular attention to the condition of the connector and wiring leading from it, since the extremely high temperatures at this location often cause the insulation on wiring and connectors to fail.

Pull the connector apart, and inspect the pins/terminals for signs of heat damage or corrosion. Replace the connector and wiring (as opposed to attempting repairs) if there is any doubt about the condition or serviceability of any part of the connector or wiring. Clear all codes after repairs are complete, and operate the vehicle normally before rescanning the system to see if the code returns.

If the code persists but the wiring is free of visible damage, prepare to test the actual boost pressure being developed.

Most manufacturers supply a dedicated testing point somewhere on the inlet tract; attach the boost pressure gauge securely to this point, and start the engine. The manual will provide details on the minimum and maximum allowable pressures, so follow the directions in the manual to obtain the most accurate test results.

If the boost pressure falls within the specified range, prepare to test the wiring and the TBCPS itself.

NOTE: If the turbo chargers’ actual boost pressure does not meet the minimum allowable pressure, check both the inlet tract and exhaust system for restrictions or blockages. Replace the air filter element if it is excessively dirty or clogged, and verify that the exhaust system allows the free extraction of exhaust gas before continuing the diagnostic procedure, or replacing any major components.

If it is certain that both the inlet tract and exhaust system are free of restrictions, but the fault persists, prepare to perform reference voltage, resistance, ground integrity, and continuity tests on all associated wiring.

Start by testing the reference voltage. Note that on some applications, this voltage is equal to battery voltage, while on others, it will be 5 volts. Determine the correct voltage, and test between the sensor connector and the PCM connector. If this voltage does not check out, check again across all intervening connectors until the problem is found and repaired.

If the reference voltage checks out, perform resistance testing on the signal wire, but be sure to disconnect the TBCPS from the PCM to prevent damage to the controller during resistance and/or continuity tests. Compare all obtained readings with the values stated in the manual, and repair or replace wiring as required to ensure that all electrical values fall within the ranges specified by the manufacturer.

If all wiring checks out but the fault persists, consult the manual on the correct procedure to follow to test the TBCPS itself. Pay particular attention to the sensors’ internal resistance, since this value is a reasonably good indicator of the sensors’ overall condition. If the sensors’ resistance does not conform to specified values, replace it with an OEM part to ensure proper operation and a reasonable service life.

NOTE: On many applications it is necessary to adapt the replacement sensor to the PCM, but for the most part, the relearning process is no more complicated than completing one or two complete drive cycles. Consult the manual to see if this required for the affected application, and be sure to follow the instructions exactly to ensure proper operation of the new sensor.

In the unlikely event that the fault persists beyond Step 5, the wiser option would be to refer the vehicle to the dealer, or other competent repair shop for professional diagnosis and repair. Although code P2653 is seldom (if ever) caused by the turbo charger itself, it is not altogether impossible, but turbo charger diagnostics is a highly specialized field, and some types of problem only occur during certain conditions, which the average non-professional mechanic is generally unable to replicate.

Moreover, some turbo problems (such as unbalanced turbine/compressor wheels), can slow the unit down to the point where insufficient boost is produced. Problems such as this require specialized equipment both to diagnose and repair, so do NOT attempt any diagnostics on the turbo itself, lest you cause damage where there was none before.

Are we still alright to drive the car for another week or so? Does it seem like a serious problem that will cost a lot of money to fix?