OBD II fault code P246C is a generic trouble code that is defined as “Diesel Particulate Filter Restriction – Forced Limited Power”, and is set when the PCM (Powertrain Control Module) detects a condition in which the diesel particulate filter is either clogged or restricted to the point where the exhaust backpressure reaches unacceptable levels.

Note that this code only affects diesel vehicles that are fitted with diesel particulate filters.

While diesel exhaust after-treatment technology has developed to the point where gaseous diesel emissions are approaching the low levels of gasoline emissions, these technologies cannot remove solid particulate matter, also known as “soot” from diesel exhaust.

Thus, to address the problem of solid soot particles (that can be as fine as solid particles in cigarette smoke) in diesel exhaust, the latest iteration of exhaust emissions regulations requires that car manufacturers fit devices known as DPF (Diesel Particulate Filters) to their diesel vehicles. In practice, these devices are required to physically trap and contain accumulated soot particles until they can be oxidized, or burnt off through one of several processes.

In most applications, the PCM is programmed not to allow the DPF efficiency to decrease below about 85% (or higher on some applications) before initiating a DPF regeneration process. In a fully functional system, and provided all required pre-conditions are met, the process can take anywhere from about ten minutes to about twenty minutes to complete successfully. However, in some cases, such as vehicles that are primarily used in city driving, the exhaust gas never reaches the required temperature to initiate or complete a regeneration event and in these cases, the DPF can become clogged in short order.

Regardless of the mechanism of DPF regeneration, though, if any fault, failure, or defect occurs that prevents successful DPF regeneration, and thereby causes the exhaust pressure to rise to above acceptable or maximum allowable limits, the PCM will recognize that the DPF is clogged or defective, and it will set code P246C and illuminate a dedicated warning light as a result.

Note that in some cases, the PCM may also initiate a limp mode in which engine power is severely restricted or limited when this code sets to protect the engine and other exhaust components. This condition will typically persist until the fault is found and corrected. Note that while a forced regeneration event performed with a suitable scan tool might resolve the issue, there is no guarantee that forced regenerations will always resolve limp modes.

Where is the P246C sensor located? 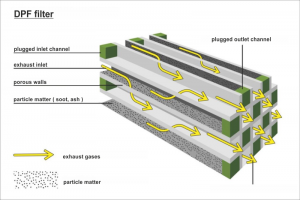 This image shows the basic operating principles of a typical DPF device. Note, however, that many DPF devices resemble other exhaust components such as catalytic converters and mufflers, so be sure to consult reliable service information for the affected application to avoid confusion, misdiagnoses, and the possible unnecessary replacement of expensive exhaust parts and/or components.

What are the common causes of code P246C?

Common causes of code P146C are largely similar across all applications, and could include one or more of the following-

WARNING: Attempts to correct or resolve this and similar codes by removing or bypassing the DPF are viewed by authorities as tampering with the emissions control system and are therefore illegal.

What are the symptoms of code P246C?

Common symptoms are largely similar across all applications but note that depending on the nature of the problem, the severity of some symptoms listed here could vary between applications-