OBD II fault code P2282 is a generic trouble code that is defined as, “Air Leak Between Throttle Body and Intake Valves”, and is set when the PCM (Powertrain Control Module) detects a variation between the volume of intake that passes through the throttle body and the volume of the intake air that passes through the intake valves. Note that this code will only be set when the deviation a) exceeds a specified threshold, and b) is present for a predefined period, which is typically about five consecutive seconds on most modern vehicles.

NOTE: While code P2282 is most commonly caused by vacuum leaks in the intake tract, it can also be caused by various types of defects in an electronic throttle control system.

For a modern engine to run efficiently while remaining within allowable emissions limits it not only obtains information on the volume of air that enters it from multiple sensors, it also uses extremely complex algorithms to verify the inputs from all implicated sensors. Moreover, a modern engine management system not only verifies inputs from sensors; it also compares inputs from various sensors with each other to ensure that all inputs are rational and within expected parameters.

Thus, on a fully functional engine, the engine management system measures the volume of air that flows through the MAF (Mass Airflow) sensor as a starting point. However, since environmental factors like the ambient temperature, relative humidity, elevation above sea level, and the actual temperature of the intake air all have a direct influence on the density, and therefore, the amount of air that can be packed into any given volume the engine management system does several cross-checks.

For instance, if the management system “knows” that the engine requires, say, “X” grams of air per second to run at “Y” number of RPMs with a given throttle opening, the system compares the actual volume of air that flows through the MAF sensor and then compares this value against inputs from sensors that include the-

– and others to “judge” the rationality of the input from the MAF sensor. Based on this calculation, and assuming that all inputs are valid and rational, the engine management system will calculate fuel delivery and ignition timing strategies to suit the volume of air that flows through the MAF sensor.

Under real-world operating conditions, the temperature of the exhaust gas is a function of the air/fuel mixture, while the oxygen content of the exhaust gas is a function of how well (or otherwise) the air/fuel mixture combusts. Thus, the engine management system compares these two values with the volume of air that enters the engine (as reported by the MAF sensor), and since the system “knows” how much fuel it is adding to the intake air, it can deduce whether (or not) additional unmetered air is entering the engine between the throttle body and the intake valves.

While most engine management systems can compensate for unmetered air by adapting both the fuel delivery and ignition timing strategies, this ability is limited. Moreover,  adaptations like this always affect fuel economy and exhaust emissions negatively, which is why engine management systems are programmed to report the presence of unmetered air within strictly defined time limits to reduce exhaust emissions.

Thus, when an engine management system detects unmetered air entering the engine after the throttle body, it will recognize that it cannot control the air/fuel mixture effectively, and it will set code P2282, and illuminate a warning light as a result. Note, though, that while this code will set immediately after a fault condition is detected on most applications, two or more consecutive detections are required to set this code on some applications.

Where is the P2282 sensor located? 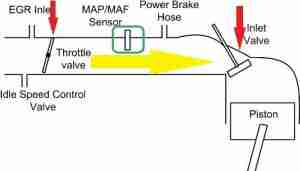 While this is a simplified view, it should be easy to see how unmetered air entering the system after the throttle body can affect the volume of air that enters the cylinders through the intake valves. See the section on “Causes” for more details on possible leak sites.

What are the common causes of code P2282?

Possible causes codes P2282 are many and varied, but these could include one or more of the following-

The most common symptoms of code P2282 are largely similar across all applications, but note that some symptoms listed here could also be caused by issues and defects that do not involve air leaks in the intake system-

Got a code P2282 how do I fix this? Where do I begin the troubleshooting?

How did you resolve it Ajit, facing the same problem

My question is also this