OBD II fault code P2263 is a generic trouble code that is defined as “Turbocharger/Supercharger Boost System Performance”, and is set when the PCM (Powertrain Control Module) detects that the turbocharger/or supercharger boost pressure either exceeds or falls below a specified or desired value given the current operating conditions.

Since forced induction with a turbo-, or supercharger is a cheap and effective way of increasing engine power without a concomitant fuel consumption penalty, most car manufacturers have resorted to adding turbochargers to small-capacity engines to boost engine power. However, for forced induction to be effective, the amount of air a turbocharger can force into an engine at any given point must be controlled precisely both to prevent engine damage, and to extract the maximum benefit from the compressed intake air.

By compressing the intake air, more air can be forced into the cylinders, which means that higher volumes of fuel must be injected into the cylinders to maintain air/fuel mixtures in which all of the fuel is combusted using all of the air, with the higher fuel/air mixture volumes being what produces the additional power.

However, since the volume of air an engine requires changes with engine speed, and injectors can only inject limited volumes of fuel, turbochargers are fitted with complex electronic control systems that control the speed of the rotating parts as a means to control boost pressure, or with simple mechanical mechanisms that allow excess boost pressure to escape into the exhaust system. Regardless of design specifics though, the purpose of all boost control systems is to maintain boost pressures at optimal levels to increase engine power, while preventing engine damage, at the same time.

It should be noted though that most modern boost control systems/modules are capable of performing boost pressure-related diagnostics independently of the PCM, and while this adds several layers of complexity to modern engine management systems, this capability has the advantage over older designs that it increases the reliability, efficiency, and accuracy of boost control systems.

Where is the P2263 sensor located? 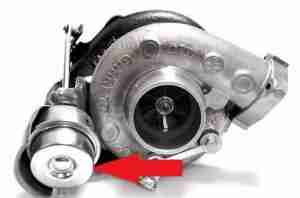 What are the common causes of code P2263?

Most common causes of code P2263 are similar across all applications but note that actual causes are largely determined by the type of boost control system in use on the vehicle. Typical causes could include one or more of the following-

Most causes of code P2263 are largely similar across all applications, and could include one or more of the following-