NOTE #2: Despite the difference in wording, both definitions given above refer to the same issue, which is a probable mechanical failure of the by-pass valve on either a turbocharger or a supercharger, depending on which forced-induction method is employed on the affected vehicle. In practice, bypass valves on turbochargers work differently from those on superchargers, but in both cases, code P2261 refers to a mechanical failure of the valve, as opposed to an electrical fault in one or more control and/or signal circuits associated with the bypass valve.

The function of forced induction with either a supercharger or turbocharger is to compress the intake air so that more air can be forced into the cylinder as compared to a normally aspirated engine with the same displacement. As a practical matter, the larger volume of air that can be forced into the cylinders allows for more fuel to be added to the air, and the combination of more air more fuel is the mechanism that allows an engine with forced induction to develop greatly more power than a naturally aspirated engine with the same displacement.

We need not delve into the inner workings of turbo-, and superchargers here, beyond saying that superchargers are typically driven by the engine with a drive belt, while turbochargers are typically driven by the engine’s exhaust gas as it exits the engine. Nonetheless, as a general rule, both types of forced induction devices develop relatively low boost pressures*at low engine speeds, and progressively higher boost pressures as the engine speed increases.

* “Boost pressure” is the difference between ambient air pressure, and the pressure that the forced induction device develops at any given engine speed. Note that this increase is not directly proportional to engine speed; actual, and maximum allowed boost pressures depend on the device, the engine design, the engine’s displacement, the design parameters of the forced induction device itself, and in many cases, the type, and quality of the fuel used.

If we assume that a forced induction engine is running at a constant speed, and the boost control system is fully functional, the boost pressure will be relatively constant, and the engine management system will adapt the fuel delivery and ignition timing strategies to suit the current boost pressure to keep the engine working at peak efficiency.

To prevent these conditions from arising, all forced induction devices are equipped with valves or other mechanisms that vent sudden pressure spikes either into the exhaust system or into the atmosphere. Some valves use simple spring tension to keep them closed, which must be overcome by boost pressure to open, while others are controlled either electrically or by a vacuum actuator. In the latter two cases, the PCM will typically monitor the actual boost pressure via a dedicated boost pressure sensor, and based on the data relayed by this sensor, the PCM will command the valve open to dump excess pressure, or to close to contain the boost pressure. In this way, the PCM can maintain the boost pressure at optimal values throughout the engine’s operating range.

In all boost control systems that are controlled by the PCM, the PCM monitors the boost pressure continuously via dedicated feedback or signal circuits, and when it detects an abnormal electrical value in any circuit that is associated with the boost control system, it will set one or more appropriate fault codes. However, in some cases, the PCM may be unable to identify the cause of the problem, especially in cases where the bypass valve is vacuum operated. In such cases, the PCM is programmed to conclude that a mechanical failure (as opposed to an electrical short circuit or open circuit being present) of the bypass valve had occurred. When this happens, the PCM will recognize that it cannot control the boost pressure effectively, and it will set code P2261 and illuminate a warning light as a result.

Note that in some cases, the PCM may also initiate a fail-safe or limp mode that will severely limit the engine speed to protect the engine against damage. The limp mode will typically persist until the fault had been found and corrected.

Where is the P2261 sensor located? 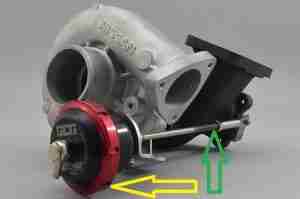 The above image shows an example of a vacuum-operated bypass valve on a fixed geometry turbocharger. In practice though, the appearance, location, and mode of operation of bypass valves vary greatly between applications. In this example, the valve is shown attached directly to the turbocharger casing, with the yellow arrow indicating the vacuum actuator, and the green arrow indicating the mechanical linkage between the actuator and the actual valve, which is located inside the turbocharger.

Note that despite differences in the location, appearance, mode of operation, and terminology used by different manufacturers, all bypass valves perform the same function, which is to relieve excess boost pressure from the intake system. However, since bypass valves vary greatly in appearance and location, reliable service information for the affected vehicle must be consulted to locate and identify the valve correctly.

What are the common causes of code P2261?

The most common causes of code P2261 are largely similar across all applications but note that in many cases, some likely or probable causes might not appear to be linked to, or associated with the boost control system in ways that are immediately apparent. Nonetheless, some common and known causes of code P2261 on most applications could include one or more of the following-

Most common symptoms are largely similar across all applications, and could include one or more of the following-

This fault happened as soon as I put my new blow off valve on, and it’s hook up correctly, any ideas?

This came up on my Veloster turbo