OBD II fault code P219B is a generic trouble code that is often defined as, “Bank 2 Air/Fuel Ratio Imbalance”, and is set when the PCM (Powertrain Control Module) detects an imbalance between the air and fuel components of the air/fuel mixture on Bank 2. On V-type engines, Bank 2 is the bank of cylinders that does not contain cylinder #1.

NOTE: The word “often” used above is rather important, since at least 12 carmakers, including Jeep, Ram, Chrysler, GMC, as well as GM and Ford (and their related makes) use varying definitions for this code. While all known variations describe an air/fuel mixture problem on Bank 2 as the result of largely identical causes, the sometimes wildly different wording used by some carmakers to define/describe this code can and often does, create some confusion about the actual meaning of the code. Therefore, in this article, we will use the definition “Bank 2 Air/Fuel Ratio Imbalance”, to avoid creating more confusion.

For any modern engine to operate at its peak while using the least fuel and creating the lowest levels of exhaust emissions possible at the same time, it is necessary to balance the volume of fuel against the volume of air entering the engine extremely well.

Doing this both accurately and consistently is a complex affair that requires accurate inputs from a wide variety of engine sensors. While all fuel management systems “know” how much fuel each injector injects during injection events because this value is derived from the fuel pressure and the injector’s “ON” time, the other part of the air/fuel mixture, atmospheric air, is subject to changes in density, and hence, volume by changes in temperature, humidity, and barometric (atmospheric pressure).

We need not delve into the complexities of how engine and fuel management systems account for all these variables here, but suffice to say that the PCM receives input data from a sufficiently large range of engine sensors to enable it to match the volume of air entering the cylinders to the volume of fuel entering the cylinders with an extremely high degree of accuracy.

If a fuel management system is fully functional, the PCM can achieve and maintain air/fuel mixtures that are stoichiometric, meaning that the air/fuel mixture contains 1 part of fuel for every 14.7 parts of air. However, since constant throttle inputs upset this balance, the fuel management system uses heated oxygen sensors (or air/fuel ratio sensors in some applications) upstream of the catalytic converter(s) to monitor and measure the oxygen content of the exhaust gas continuously during closed-loop operation. Note that closed-loop operation starts when the PCM begins to use feedback signals from the oxygen sensors to control the air/fuel mixture.

In terms of implementation on in-line engines, short-term fuel trims affect all the cylinders in the engine equally. On V-type engines, all the cylinders in each bank are also affected equally, and in theory, fuel trims on both banks should have equal positive or negative numbers, which are monitored continuously. Thus, when a fault, defect, or malfunction occurs that affects the composition of the air/fuel mixture on one bank of cylinders, and not the other, the PCM will recognize that it cannot balance the air/fuel mixture across both banks of cylinders, and it will set code P219B, and illuminate a warning light as a result.

Note though that on many applications, the failure must occur multiple times over consecutive drive cycles before the code will be set, or a warning light is illuminated.

Where is the P219B sensor located? 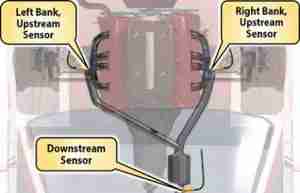 This image shows a schematic representation of a top-down view of a V8 engine installed in a vehicle. Note the location of the upstream oxygen sensors, but be aware that either the “Right Bank” or the “Left Bank” could be designated as Bank 2 for the purposes of this code’s definition. Depending on the vehicle make and model, Bank 2 could be either the left or the right bank, but in all cases, Bank 2 would be the bank of cylinders that does not contain cylinder #1.

What are the common causes of code P219B?

NOTE: Be aware that since all the cylinders in an in-line engine are affected equally by air/fuel mixture issues, some causes of code P129B on in-line engines, such as clogged or dirty air and/or fuel filters will not affect only one bank of cylinders on a V-type engine, since these filters typically serve both banks of cylinders. Nonetheless, the most common causes of code P219B on V-type engines could include one or more of the following-

What are the symptoms of code P219B?