OBD II fault code P2185 is a generic code that is defined as “Engine Coolant Temperature (ECT) Sensor 2 – Circuit High”, or oftentimes more precisely as “Coolant Temperature Sensor at Radiator Outlet Signal High” and is set when the PCM (Powertrain Control Module) detects an abnormally high voltage either in the affected sensor itself, or in the affected sensor’s control/signal circuit(s).

SPECIAL NOTES: It should be noted that some applications use multiple (more than two) engine coolant temperature sensors for different purposes, and in the case of code P2185, the affected engine coolant temperature sensor is usually associated with the radiator cooling fan(s). However, be aware that not all car manufacturers follow this convention, which means that on some applications, code P2185 could refer to a sensor that is associated with other functions, such as fuel delivery, fuel injector pulse width management, or the operation of the heat gauge in the dashboard. For this reason, it is imperative that the correct sensor be identified when this code appears on any given application to prevent misdiagnoses. END OF SPECIAL NOTES.

Nonetheless, if we take the most common definition of code P2185 to be “Coolant Temperature Sensor at Radiator Outlet Signal High”, the function of the affected sensor is to monitor the temperature of the engine coolant at the radiator outlet, from where the cooled coolant is passed back into the engine.

In a fully functional cooling system, the flow or circulation of the coolant is managed by a thermostat, which either opens or closes in response to the temperature of the engine coolant. Thus, assuming that the thermostat is working as designed, the coolant is circulated in such a way that the hot coolant enters the top of radiator, and exits the radiator at the bottom after having shed much of its heat to the atmosphere.

As a practical matter though, the PCM needs to “know” exactly how hot the coolant is when it exits the radiator in order to be able to control both the speed and duty cycle (“ON” time) of the cooling fans, which greatly increases the efficiency of the cooling process, and to provide the PCM with this information, the #2 coolant temperature sensor is located close to the radiator outlet.

When the PCM calculates that upon exiting the radiator the coolant’s temperature approaches or exceeds a maximum allowable threshold, it will activate the radiator fans to speed up the cooling of the engine coolant, and in a fully functional cooling system, the coolant may be cooled down to the point where the thermostat closes, and the radiator cooling fans are deactivated. When this happens, the coolant stops circulating until it has absorbed sufficient heat from the engine for the thermostat to open again to restart the coolant circulation and cooling process.

However, if a defect, malfunction, or failure occurs anywhere in the cooling system that influences how the PCM calculates the actual engine coolant’s temperature at the radiator outlet, the PCM will recognize that it cannot manage the engine’s temperature effectively, and it will set code P2185 and illuminate a warning light as a result.

NOTE: One example of such a defect, malfunction, or failure would be a thermostat that is stuck in the closed position. If this happens, the engine coolant can heat up through convection to the point where the coolant is much hotter at the radiator outlet than it would have been had the thermostat worked correctly, which would generate a higher than expected signal from the #2 sensor, given the length of time the engine had been running.

Where is the P2185 sensor located? 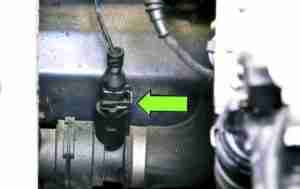 The image above shows the location of the #2 engine coolant temperature sensor close to the outlet of the radiator on an E46 BMW application, but on many applications, this sensor can also be located in the bottom tank of the radiator. Note though that in all cases, the sensor will be located so that it is in direct contact with the engine coolant.

What are the common causes of code P2185?

Some common causes of code P2185 could include the following-

Some common symptoms of code P2185 could include the following-

NOTE: Be aware that the engine could overheat fatally when this code is present, since this sensor is generally not involved in the display of the engine temperature on the dashboard. In translation, this means that an engine can overheat due to the radiator fans not working, or not working properly, even though the indicated engine temperature reading may be normal on the dashboard. Be aware that in most cases of engine overheating, the damage is already done by the time the temperature gauge registers an abnormally high reading, which is why all cooling system related warning lights should be taken very seriously.