The P2159 diagnostic trouble code is a generic code sent from the PCM. It stands for vehicle speed sensor (VSS) B range /performance problem. While the error is a generic code, it is prone to show on vehicles like Hyundai, VW, and Jeep, requiring different fix methods.

The “B” speed sensor location is inconsistent between vehicle makes.  Most commonly, the “B” wheel speed sensor corresponds to the sensor at the front wheel of the passenger tire.  By this definition, the “A” speed sensor is the sensor found at the frontal axle of the driver tire.  But there is no consistent location to the “B” sensor designation and you need to look at specific technical information for your specific vehicle to determine the exact meaning of the “B” sensor.

Although about the meaning of the B sensor is inconsistent, the P2159 VSS range / performance is standard across all vehicles, referring to a malfunction of the wheel speed sensor.

The wheel speed sensor, also referred to as the ABS wheel sensor is designed to generate signals in the form of waves proportional to the speed of the moving vehicle. The pulse or signal created is passed to ABS control module, which monitors and evaluates the number of pulses to determine the vehicle speed.

Unlike vehicles with ABS control module, vehicles without ABS are directly connected to the PCM. The PCM receives vehicle speed info straight from the speed sensor to make important decisions. Cars with the ABS module will have their PCM connected to the control module rather than directly to the speed sensor. A damaged sensor will most likely be followed with an ABS warning light.

Such information is interpreted by the PCM and is used to make mechanical decisions on vehicle actions such as when the ABS should initiate the brake, fuel ignition, torque converter clutch scheduling, ignition timing, etc.

In addition, there are many factors that cause the wheel speed sensor to malfunction and trigger the P2159 code. For instance, when the speed sensor is physically damaged, failure of the transmission to shift may trigger the P2159. When the PCM receives a signal below the recommended range, the code will be stored, and the check engine light together with the ABS warning light displayed on the car dashboard.

It’s important to note that the ABS (Anti Brake System) relies on the information produced by the wheel speed sensor to determine when to lock or release pressure, especially instability and maneuver.

In diagnosing the code, I recommend inspecting the wiring around the car’s speed sensor. A broken, exposed, or burnt wire may be why the code is stored. Study the car manual to find where the wheel speed sensor is located. In most vehicles, it can be located between the wheel and axle. If there are no damages to the wiring, inspect the voltage of the WSS. A lower voltage than the manufacturer’s standard could be the reason for the code. On some occasions, the sensors may be damaged and would need a complete replacement to fix these issues.

Also, it is possible to drive your vehicle with a bad wheel speed sensor, although I would not recommend that you do. The speed sensor influences many aspects of an efficient driving experience. The vehicle system relies on the information produced by the WSS, such as the cruise control. Therefore, I encourage car owners to solve this issue as soon as possible.

Note: The most common fix for the P2159 trouble code is to replace the Wheel speed sensor. Although, a faulty WSS is not necessarily the only cause of the trouble-code. Other components like some ABS sensors may be responsible for the code. Also, the P2159 should not be mistaken for the vehicle speed sensor malfunction.  A VSS malfunction will more likely store a P0500 trouble code.

Where is the P2159 sensor located? 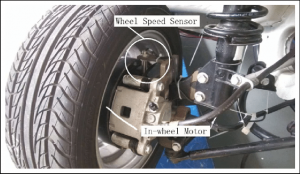 As stated earlier, the wheel speed sensor is located on the brake rotor of the front tires, and at the and the rear end of the rear tires. It  is designed to monitor the rotational speed of of the tires and report the info to the ABS control module

The ABS control modules read speed information directly from the speed sensors  and use the information to control the  release of pressure in the brake system. Most cars are designed to have two sensors on the front wheel, and one one the rear wheel. If any of this sensor is damaged or has poor wiring , the trouble code will be stored and the ABS warning light will be triggered.

What are the common causes of code P2159?

You should expect the common cause of the code to revolve around the fault of the key components of the sensors. For instance, a broken or exposed wire could cause the P2159 code to be stored. Other common causes of the cause include:

The P2159- vehicle speed sensor B- range and performance problem is unique because it may not trigger the check engine light. The following are other symptoms that you may look for whenever you notice a store P2159 code:

The P2158 is very similar to the P2519 error code. It is triggered when the PCM ( powertrain control module) detects a VSS B variation in voltage. This may mean a lower, higher or no voltage in the VSS. The mil warning light usually follows this.

The P2160 generic code is also similar to the other codes but differs because the code is triggered by low voltage in the VSS. The code will also trigger the check engine warning light to alert the user.

The P2161 vehicle speed sensor B erratic is a generic code triggered by a high current from the Vss. The ECM will throw this code if it notices that the VSS B gives a higher voltage than standard.

The P2162 shows that the ECU has detected voltage discrepancies between two different vehicle speed sensors.

good morning. I want to know where this sensor is located

Javier: It depends on the vehicle. What Year Make Model vehicle?