What Does Code P20EE Mean?

OBD II fault code P20EE is a generic code that is defined as “SCR NOx Catalyst Efficiency Below Threshold Bank 1”, and is set when the PCM (Powertrain Control Module) detects that the catalytic converter on Bank 1 is operating below an acceptable or allowable minimum efficiency threshold. Note that code P20EE only applies to applications that use SCR (Selective Catalytic Reduction) technology and that “Bank 1” refers to the bank of cylinders that contains cylinder #1.

NOTE: It should be noted that the presence of code P20EE rarely indicates a failure of a catalytic converter itself, and that other codes relating to the reductant injection system are almost invariably also present when code P20EE is present.

CSR technology refers to a system in which precisely measured quantities of a liquid reductant (typically urea obtained from ammonia, and commonly known as “Diesel Exhaust Fluid”) is mixed in with the exhaust stream before the exhaust stream passes through a catalytic converter.

While non-CSR catalytic converters are fairly efficient and remain so for extended periods of time unless serious issues with excessive oil consumption or over fuelling arise, the addition of a reductant to a CSR compatible catalytic converter greatly enhances that converter’s ability to reduce especially NOx (oxides of nitrogen) in particularly diesel exhaust to harmless substances.

Thus, if the PCM detects that the voltage patterns of the two oxygen sensors are too similar, or that the exhaust gas temperature is too high on the converter’s exit side (based on pre-programmed values) it will recognize that the catalytic converter is operating below a minimum allowable efficiency threshold. When this happens, the PCM will inject a precisely calculated amount of reductant into the exhaust stream to correct the efficiency problem. Note that the amount of reductant that is injected is based on average fuel consumption as measured over the period since the last injection event.

If the injection of reductant does not cause in increase in the efficiency of the catalytic converter, as measured by both the oxygen and other sensors such as NOx, exhaust gas temperature sensor, and exhaust pressure sensors, the PCM will recognize that the affected catalytic converter is operating below an allowable efficiency threshold and it will set code P20EE and illuminate a warning light as a result. Note that some applications will also enter a failsafe or limp mode that will persist until the fault is corrected.

Where is the P20EE sensor located? 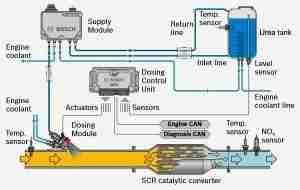 Also, note that since code P20EE can be caused by failures, malfunctions, and defects in almost any part of the reductant system, it is critically important always to refer to the manual for the affected application to locate and identify parts and components correctly. Failure to do this will almost certainly result in wasted time, misdiagnoses, the unnecessary replacement of expensive parts and components, and quite possibly additional damage not only to the reductant injection system, but also to the application’s electrical system.

What are the common causes of code P20EE?

NOTE: As stated elsewhere, additional codes will almost always accompany code P20EE, any one or more of which codes will more often than not be the root cause of P20EE. Therefore, it is important to record all fault codes and freeze frame data present before attempting to diagnose P20EE. Moreover, all additional codes must be resolved in the order in which they were stored before a diagnosis of P20EE is attempted, since doing so will often resolve code P20EE as well.

Nonetheless, some common causes of code P20EE could include the following-

Loose filler cap? Did this come on for anyone after a fill up?

Yes it did on a new VW Transporter

When the check engine light came on, I had Auto Zone check the code and it showed “P20EE FORD – SCR NOx Catalyst Efficiency Below Threshold Bank 1”. I chose to wait instead of taking to dealership. After about 5 days of driving, the light cleared.

When you threw code p20ee did you loose power while driving?

Ford Dealer is telling me that use of aftermarket fuel additives can cause/trigger a engine light or in my case P20EE & P2459 codes. 1st time @ dealer codes cleared/re-program computer. About a week later, CEL/code P20EE back. 2nd time at dealer, clear code, re-do computer and now say the part about using aftermarket fuel additives. Have used same additive in truck since new, used in last 2 trucks w/o any problems. Oh, less than 2 weeks after 2nd visit to sealer, CEL back on.