The purpose of the reductant injection system on modern vehicles is to introduce precisely metered amounts of a gaseous or liquid reductant to reduce harmful exhaust emissions beyond the reductions that are possible with catalytic converters, diesel particulate filters, EGR (Exhaust Gas Recirculation), or variable valve/cam timing systems alone.

Since their invention in the early 2000’s, many different selective catalytic reduction (SCR) systems have been developed, and many SCR systems in use today depend on proprietary technologies to monitor and control the injection of reductant fluid. However, all systems consist of the same basic components, such a reductant tank, a heater element to heat the reductant fluid to a set temperature, liquid feed lines, an injector, dedicated pressure/temperature sensors, electrical wiring /connectors, and one or more control modules that work in conjunction with the PCM to control and/or monitor the operation of the reductant injection system.

On some applications, compressed air is used to aid in the mixing of the reductant fluid with the exhaust stream, and although the added components that include an air compressor /pump, air lines, pressure sensors, and additional wiring/connectors increase the complexity of the reductant injection system, the practical advantage of an air assisted reductant injection system is that the conversion rate of NOx (nitrogen oxide) into harmless substances is greatly increased.

For the conversion process to be efficient as possible in modern systems, the amount of reductant that is injected into the exhaust stream must match the reductant demand exactly to prevent the possibility that some NOx remains unconverted when too little reductant is injected, or that excess reductant is expelled through the exhaust system when too much reductant is injected. Note that in the latter case, some of the partially converted NOx can sometimes be reconverted back into nitrous oxide under some conditions, which largely defeats the purpose of having a catalytic converter in the first place.

Therefore, some manufacturers, most notably Ford, have developed reductant injection systems in which compressed air is injected along with the reductant. In practice, the compressed-air stream vaporizes the reductant fluid more efficiently than is possible to do with other mixing devices and methods. The improved mixing process “spreads” or distributes the reductant more evenly across the catalyst, thus resulting in improved conversion rates of NOx into water, oxygen, and water vapor. At the same time, the improved mixing of the reductant with the exhaust stream makes it possible to match the required amount of reductant with the amount of NOx entering the catalytic converter more closely.

However, the efficiency of the mixing process depends on the volume, pressure, and flow rate of the compressed air being at specified levels. To monitor this, the PCM and other control modules use a dedicated pressure sensor (not to be confused with the exhaust gas pressure sensor or the reductant pressure sensor) that measures the pressure of the compressed air being injected. In terms of operation, the reductant injection air pressure sensor is a pressure-sensitive sensor whose resistance changes in direct response to changes in the air pressure it monitors. As the pressure increases, the sensor’s resistance decreases, thus allowing more current to be passed back to the PCM, and vice versa.

The PCM interprets the changing signal voltage as pressure, and should the PCM (or other control module) detect a general failure of the reductant air pressure sensor, or a malfunction in its control circuit(s) that prevents the PCM from receiving valid and plausible input data from the sensor, it will set code P2038 as a result.

Where is the P2038 sensor located? 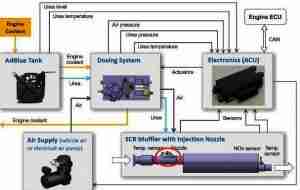 Note though that since the reductant air pressure sensor often resembles other pressure sensors, it is important always to refer to the manual for the affected application to locate and identify sensors and other components correctly. Failure to refer to the manual could result in wasted time, confusion, misdiagnoses, and the distinct possibility that further damage to the reductant injection system could occur.

What are the common causes of code P2038?

Note that in most cases, code P2038 refers specifically to a general failure or malfunction of the reductant injection air pressure sensor itself, and rarely to general wiring issues that influence the operation of the sensor. Since these kinds of wiring issues are typically indicated by codes other than P2038, the possible cause(s) of code P2038 is far more likely to involve only this particular sensor rather than faults/failures/defects in parts, components, circuits, or subsystems elsewhere in the reductant injection system.

Typical causes of code P2038 could include the following-