OBD II fault code P2031 is a generic code that is defined as ““Exhaust gas temperature (EGT) sensor 2, bank 1 – circuit malfunction”, and is set when the PCM (Powertrain Control Module) detects a general malfunction in the control circuit of the #2 EGT (Exhaust Gas Temperature) sensor (or in the sensor itself) fitted to the exhaust system of bank 1. “Bank 1” refers to the bank of cylinders that does contains cylinder #1, while sensor #2 most commonly refers to the exhaust gas temperature sensor that is fitted downstream of the catalytic converter.

NOTE: The root causes of the excessively hot (or cold) exhaust gas will almost certainly be indicated by other, dedicated codes that could include fuel/air metering related codes, and/or by codes relating to malfunctions of other exhaust sensors, which malfunctions can sometimes contribute to the setting of code P2031.

In practice, the PCM interprets the changing signal current as changing degrees of temperature, and by comparing the input data it receives from both the upstream and downstream exhaust gas temperature sensors in near-real time, it can calculate an efficiency factor for the catalytic converter. However, should a failure occur in the #2 (downstream) EGT sensor and/or its control/signal circuit(s),the PCM can no longer effectively monitor the operation of the catalytic converter, (or initiate corrective measures if required), and it well set code P2031 as a result.

Note that on some applications, the PCM will also illuminate a warning light immediately when the failure is detected, while on others, the fault needs to be registered several times before a warning light will be illuminated. In these cases, code P2031 will be stored as a “pending” code.

Where is the P2031 sensor located? 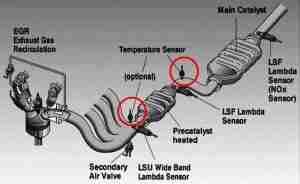 NOTE: Diesel exhaust systems are fitted with DPF’s (Diesel Particulate Filters, but not shown here) whose operation and regeneration largely depend on exhaust gas temperature sensors, one of which is fitted upstream and downstream of the DPF. Moreover, advanced exhaust systems are also fitted with several other sensors, such as NOx -, oxygen -, pressure sensors, and sometimes pressure differential sensors, whose labelling or numbering in the system may vary between manufacturers.

What are the common causes of code P2031?

Some common causes of code P2031 could include the following-