NOTE: While auxiliary heating systems, and especially fuel-fired systems, are rare to almost non-existent on American-produced vehicles, these systems are very common on diesel-powered vehicles that are produced in Europe, with the most notable examples being VAG group vehicles, as well as Volvo, Saab, and Opel/Vauxhall models.

While the design specifics of fuel-fired auxiliary heating systems vary between manufacturers, all systems have the purpose of producing heat to warm mainly the passenger cabin. Since diesel engines are much more efficient than gasoline engines, a diesel engine takes significantly longer than a gasoline engine to heat up to the point where the engine coolant is sufficiently hot to supply heat to the cabin via the conventional heating system. Thus, in practice, an auxiliary heating system can produce heat within a few seconds of starting the engine, and will usually produce heat for a maximum period of about 30 minutes on most applications.

In terms of operation, a fuel-fired auxiliary heating system burns a small amount of fuel in a sealed combustion chamber. The resulting hot air is then distributed by a blower or fan to various parts of the vehicle via the existing heating/ventilation ducting network. However, due to high risk of harmful diesel combustion products reaching the inside of the vehicle, the PCM uses input data from sensors that monitor the atmosphere inside the vehicle for the presence of harmful and toxic gasses. Failure of these sensors is very common, and one or the primary causes of the PCM disabling the system for safety reasons.

Nonetheless, some manufacturers also use the fuel-fired auxiliary heating system to heat the engine coolant for a preset time before the engine is started, while others use the system to heat the engine block as well. The practical advantages of this that a warm engine is easier to start on the one hand, and that a warm engine distributes engine oil more efficiently, thus reducing mechanical wear of moving parts during engine starts in sub-zero temperatures, on the other hand.

Other components of the auxiliary heating system include electrical wiring, connectors, timers and fuses, a thermostat,  small-diameter fuel lines, a dedicated fuel filter, an injector to vaporize the fuel, an electrical igniter to ignite the fuel when the system is activated, a fan, or blower, various pressure sensors, and a system through which the heating system’s exhaust gasses can be extracted safely to the main exhaust system.

From the above it should be obvious that the entire fuel-fired auxiliary heating system must be in perfect working order for it not to pose a safety or health risk to the vehicles’ occupants. Therefore, the PCM will disable the entire auxiliary heating system when it detects a fault, defect, malfunction, or failure in any part or component of the system as a safety precaution. Note though that on some applications, more than one failure needs to occur before the PCM will illuminate warning light.

Where is the P2029 sensor located? 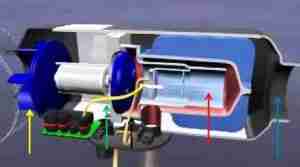 Note that depending on the application, the auxiliary heating unit can be located in a number of places on the vehicle. On some applications, the unit is located in the engine compartment, while on others it can be located at a variety of places under the vehicle, or even in a front wheel well. Therefore, it is important always to refer to the manual for the affected application to identify and locate all parts, components, wiring, fuel lines, and control switches correctly. Failure to refer to the manual could result in a misdiagnosis, wasted time, and the distinct possibility that further damage to the auxiliary heating system might occur.

What are the common causes of code P2029?

Some common causes of code P2029 could include the following-