OBD II fault code P2027 is a generic code that is defined as “Evaporative emission (EVAP) fuel vapour temperature sensor – high voltage”, and is set when the PCM (Powertrain Control Module) detects an abnormally high voltage in either the control or the signal circuits of the fuel vapor temperature sensor. Note that the fuel vapor temperature sensor (also sometimes known as the “fuel tank pressure sensor) is used for leak detection in the EVAP (Evaporative Emission Control) system, and should not be confused with the fuel pressure sensor, which performs and entirely different function and is not related to the EVAP system.

Where is the P2027 sensor located? 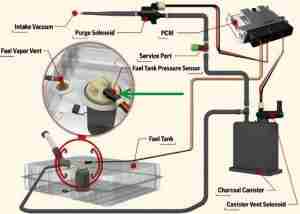 What are the common causes of code P2027?

NOTE:  Unless other EVAP system related codes are present along with P2027, it is unlikely that other major components of the EVAP are implicated in the circuit failure. However, if other EVAP and/or fuel system codes are present, these codes must be resolved in the order in which they were stored before a diagnostic procedure for code P2027 is attempted. Failure to do this will almost certainly result in a misdiagnosis, wasted time, and additional damage to the vehicle’s electrical system, as well as the unnecessary replacement of expensive parts and components.

Nonetheless, some common causes of code P2027 could include the following-