SPECIAL NOTES: Due to the vast number of different manifold air control system designs in use today, non-professional mechanics are strongly urged to read the section in the manual for the application being worked on that deals with this system before attempting a diagnosis of code P2021, or any of its related codes, these codes being P2019, P2020, P2022, and P2023.

Failure to gain at least a basic understanding of this system more often than not leads to confusion, misdiagnoses, and the unnecessary replacement of parts and components. In addition, be aware that because of the differences in design specifics, this guide cannot provide detailed diagnostic and repair information for P2021 that will be valid for all applications under all conditions. For this reason, the generic information provided here should NOT be used in any diagnostic procedure for code P2021 without making reference to the manual for the application being worked on.

Nonetheless, the generic information provided here should enable most non-professional mechanics to diagnose and resolve code P2021 on most applications without too much effort or trouble. END OF SPECIAL NOTES.

OBD II fault code P2021 is a generic code that is defined by all manufacturers as “Intake manifold air control actuator position sensor/switch, bank 2- circuit low”, and is set when the PCM (Powertrain Control Module) detects an abnormally low voltage in the control circuit of the position sensor of the manifold airflow-control device. On engines with two cylinder heads, “Bank 2” refers to the bank of cylinders that does not contain cylinder #1.

Regardless of the feedback signals received by the PCM from other sensors, the PCM will set code P2021 and illuminate a warning light when the feedback signal from the position sensor/switch that indicates the position of the manifold airflow control flaps is lower than expected. At this point, it should be noted that code P2021 is almost invariably caused by malfunctions of, or defects in, the position switch/sensor itself or in the wiring that is associated with the switch/sensor, and it is rare for this code to be caused by a failure of the mechanism(s) inside the inlet manifold. 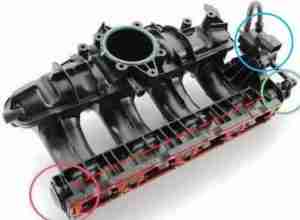 What are the common causes of code P2021?

Common causes of P2021 could include the following-

Common symptoms of P2021 could include the following-

How do you troubleshoot code P2021?

NOTE: On systems that use engine vacuum to control/regulate the manifold airflow control system, a hand-held vacuum gauge fitted with a graduated gauge will be most helpful in diagnosing P2021.

NOTE: If there are other codes present along with P2021, take careful note of them for future reference, since in some cases, especially on some Nissan applications, P2021 cannot be resolved before some accompanying codes are resolved first. Refer to the manual for the definitions of other codes, and take note of the possible implications of all other codes on P2021.

In nine instances out of every ten, the diagnostic/repair steps up to Step 5 will resolve P2021. However, on applications where the manifold airflow control system is regulated or controlled by engine vacuum, things are a little more complicated. On these applications, most of the components are made from plastic and rubber, neither of which is designed to withstand heat, vibration, and high under-hood temperatures for years on end without failing.

Thus, diagnosing P2021 on these applications will usually start with a thorough inspection of all associated vacuum lines. Look for hardened, cracked, split, or dislodged vacuum lines, and replace any vacuum line(s) that is/are not in a perfect condition.