Diesel engines, in one way, offer better torque and fuel economy than gasoline engines. On the other hand, the fuel itself tends to produce more PM2.5 and PM10 or “soot” (particulate matter less than 2.5 µm and 10 µm in size), which is hazardous to human health and the atmosphere. Modern diesel engine technology and diesel fuel refinement has managed to eliminate much of these emissions, but there are still certain circumstances when more PM will be generated, usually when the engine isn’t running as hot, such as on short trips and in stop-and-go traffic. 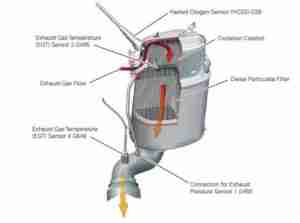 The diesel particulate filter (DPF) captures PM emissions that are generated while the vehicle is driven in low-load conditions, storing them until they can be burned off. When the vehicle is driven in high-load conditions, such as up hills or on long trips, the ECM (engine control module) will command additional fuel injection, which increases DPF temperatures to 450 °C to 600 °C (840 °F to 1,112 °F), enough to completely oxidize stored PM emissions, clearing the filter without releasing harmful PM emissions to the atmosphere. This process is called DPF regeneration or “regen” and typically occurs automatically every 250 to 500 miles.

The ECM uses a differential pressure sensor (DPS) to measure the effectiveness and capacity of the DPF. Simply speaking, the DPS measures the difference in pressure before and after the DPF. A clean filter doesn’t provide much resistance to the exhaust close, and the DPS measures little to no pressure differential. As the DPF collects PM emissions, resistance to exhaust flow gradually increases, effecting a gradual increase in pressure differential. Depending on the vehicle, a certain DPS threshold may trigger a DPF regen cycle, but only if conditions are right. Some vehicles may trigger a DPF regen cycle around 15% capacity, for example. 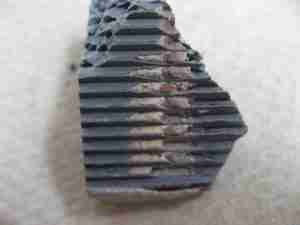 If conditions are insufficient for a DPF regen cycle, the DPF simply continues to collect PM emissions until they are. Still, the DPF only has a certain capacity, which the ECM continues to monitor via the DPS. Again, depending on the vehicle, once the DPF reaches a certain capacity, somewhere between 20% and 80%, the ECM may need to alert the driver of the need for a DPF regen cycle. If this occurs, the malfunction indicator lamp (MIL) will be illuminated and a diagnostic trouble code (DTC) will be set in system memory. DTC P2003 is defined as “Diesel Particulate Filter (DPF) Efficiency Below Threshold (Bank 2).”

What are the common causes of code P2003?

Depending on year, make, and model, DTC P2003 may have number of causes. Here are some of the most common.

Depending on the failure mode, you may not notice anything other than the MIL. Other vehicles may put the powertrain into limp-home mode, restricting engine and transmission performance. Vehicles with an overcharged DPF may experience hard starting, poor fuel economy, poor acceleration. Concurrent DTCs may also appear, such as EGR (exhaust gas recirculation), turbocharger, or fuel trim faults, even if there are no faults in these systems.

How do you troubleshoot code P2003?

Because this DTC describes what is pretty much a self-maintenance issue, this DTC may stay in memory even if the ECM successfully runs a DPF regen cycle. Generally, the first course of action is to clear the DTC and see if it comes back. If the DTC doesn’t return, then you can safely assume that the DPF regen cycle had run successfully, leaving nothing more than the residual DTC. If the DTC does return, here are some troubleshooting steps to help you resolve the issue. 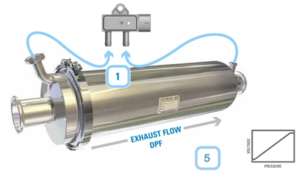 Warning: There are technicians and shops who will remove the DPF from practically any vehicle, which eliminates DPF problems from recurring ever again. At the same time, depending on where you are, this may be highly illegal, resulting in fines for both owner and provider.