OBD II fault code P160A is a manufacturer-specific trouble code that is defined by carmaker Ford as, “Control Module Vehicle Options Reconfiguration Error”, and is set when the PCM (Powertrain Control Module) detects a communication error between itself and the BCM (Body Control Module) while sending or receiving data about the configuration of systems controlled by the BCM.

The topic of how the various serial communication systems on a modern Ford application work, and how they are integrated into each other is a hugely complex and technical one, but suffice to say that to avoid conflicts between control modules and communication systems, certain control and management functions are assigned to dedicated control modules.

This arrangement effectively splits the overall communications systems, aka CAN (Controller Area Network) systems into more manageable pieces or sections, but to maintain the overall integration of all the communication systems, all the control modules in a given section (of a CAN) system have to be able to communicate both with each other, and with the PCM.

One such sub-system of communication exists between the PCM and the BCM (Body Control Module), which is a kind of generic term for a control module that monitors and controls various systems and components within a vehicle’s body. In the case of Ford applications, the BCM controls too many functions, parts, components, and systems to list all, or even most here but one example would be the effect that the tire/wheel diameter has on how the engine and transmission interact with each other.

For example, the diameter of the wheels is one aspect of the overall gearing of the vehicle, meaning that fitting bigger or smaller wheels/tires has a direct effect on the vehicle’s road speed as a function of the engine speed. Put differently, this means that if the vehicle traveled at say 10 mph per 1000 RPM in first gear, fitting larger wheels than the stock wheels will increase the vehicle’s speed to say 12 mph per 1000 RPM in first gear because the larger wheels cover a greater distance per wheel revolution than the stock wheels. One further effect of this is that gearshift points will change a well since shift points are based on engine speed and load, both of which are altered by the change in wheel size.

As a practical matter, the wheel size is a parameter that is programmed into each vehicle, but for the vehicle manufacturer to save costs by not having to produce an entirely new BCM for each model or variant, the vehicle manufacturer has made the wheel size parameter programmable. Thus, if a car owner wishes to fit larger wheels to the vehicle, he has the option to reprogram or reconfigure the BCM to accommodate the new wheel size to maintain the original interaction between the engine and the transmission.

Similarly, it is possible to reprogram several parameters to maintain the original functions and operation of several systems and/or components. However, these reprogramming procedures can only be performed with Forscan (dealer level) equipment, and while this equipment is available in the aftermarket, reprogramming of BCM parameters by non-professional mechanics often fail for various reasons. Regardless of the cause of the reprogramming/communication failure, though, the PCM will set code P160A, and may or may not illuminate a warning light when it detects such a failure.

Where is the P160A sensor located? 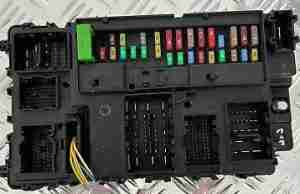 Nonetheless, some typical locations are under the dashboard, behind kick panels on either the driver or passenger side or inside the center console. However, since these modules are not user-serviceable, we strongly recommend that non-professional mechanics seek professional assistance with the diagnosis and repair of the BCM on any Ford application because of the high risk of inadvertently causing damage to the vehicle’s electrical system.

What are the common causes of code P160A?

What are the symptoms of code P160A?

Nonetheless, some typical drivability issues may include the following, but note that this list is neither complete nor exhaustive-