OBD II fault code P1586 is a manufacturer-specific trouble code that is defined by carmakers Citroen, Peugeot, Ford, Jaguar, Lincoln, Mercury, and Oldsmobile as, “Throttle Control Unit Throttle Position Malfunction”, and is set on these applications when the PCM (Powertrain Control Module) detects a malfunction in the throttle position sensor or the sensor’s control/signal circuits.

On the vehicles listed above, there is no mechanical linkage such as a control cable between the throttle pedal and the throttle blade. Instead, these applications are fitted with so-called drive-by-wire throttle control systems that use electric motors to control the movement of the throttle blade.

So when a failure or malfunction occurs that either causes an actual gross miscorrelation between the positions of the throttle blade and the throttle pedal, or a failure or malfunction occurs that the PCM interprets as a gross miscorrelation, the PCM will recognize that it cannot control the throttle position effectively. When this happens, the PCM will set an appropriate throttle control-related fault code and illuminate a warning light, but note that in many instances of code P1586 on the applications listed above, the PCM will also initiate and maintain a fail-safe or limp mode as a safety precaution.

In most cases, the PCM will severely limit the engine speed and lock an automatic transmission into second or third gear, but in all cases, the limp mode will persist until the fault is found and corrected, with corrective action including performing specified throttle control and idle speed relearning procedures.

Where is the P1586 sensor located? 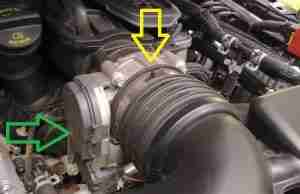 It should be noted, however, that while drive-by-wire throttle bodies are sometimes repairable, even on a DIY basis, repairs typically offer only a temporary solution. Therefore, the wiser option is always to replace worn, damaged, or defective electronic throttle bodies with an OEM part, or at least, an OEM-equivalent part to ensure reliable operation of the part over the long term.

What are the common causes of code P1586?

Common symptoms of code P1586 are similar across all listed applications, and could include one or more of the following-

Changed the dps and crank shaft sensor, what else?

My peugeot 207cc 1.6 HDI 2017 has this cod P1586 and the car displays Depolution system faulty.
So, what stands this cod for?
Best regards
Ilpo