SPECIAL NOTES: Since code P1568 relates to malfunctions in the cruise control system, non-professional mechanics are strongly urged to read the section in the repair manual for the application that deals with this safety-critical system before attempting a diagnosis of this code, or any of its related codes.

Also, note that due to major design differences between the cruise control systems of different manufacturers, this guide cannot provide detailed diagnostic and repair information that will be valid for all applications under all conditions. Despite this though, the generic information provided here should enable most non-professional mechanics to diagnose and repair simple vacuum -, or electro-mechanically controlled cruise control systems on most applications without encountering undue problems or difficulties, provided that proper reference is made to the manual for the application at every step.

However, it is NOT recommended that non-professional mechanics attempt diagnoses and/or repairs of adaptive cruise control systems. These designs use either a laser or a radar beam to measure the application’s proximity to the vehicle in front in order to maintain a safe following distance from that vehicle without any inputs from the driver. The initial input data from the laser/radar range finder, the vehicle speed sensor, the throttle position sensor, and (where fitted), the transmission control module is shared between up to six or more different control modules, such as the ABS control module, transmission control module, throttle control module/actuator, and others.

As such, the communication between affected modules are transmitted via the CAN (Controller Area Network) bus system, which means that professional grade diagnostic equipment (including an oscilloscope), above average diagnostic skills in general, and expert-level knowledge of the affected application in particular are required to diagnose faults in the CAN bus system.

In light of the above, non-professional mechanics are advised NOT to attempt a diagnosis and/or repair of an adaptive cruise control system to avoid possible damage to the affected vehicles’ electrical system in general on the one hand, and to prevent the distinct possibility of making an already notoriously unreliable system even more unreliable and dangerous if the diagnostic/repair procedures prescribed by the manufacturer are not performed correctly, on the other. END OF SPECIAL NOTES.

OBD II fault code P1568 is a manufacturer specific code that is defined by car makers Ford, Jaguar, Kia, Lincoln, Mazda, Mercury, Saturn, and Oldsmobile as “Speed Control Unable to Hold Speed” and by General Motors, as “Cruise Servo Stroke Greater Than Commanded In Cruise”. Note that both definitions have the same basic meaning, which is that code P1568 sets when the cruise control system on these applications is unable to maintain the speed set by the driver.

In terms of operation, when a non-adaptive cruise control system is activated at a road speed that exceeds the minimum allowable speed, the system gathers information from the throttle position sensor, vehicle speed sensor, the transmission control module, if fitted. This data is sent to the PCM, which “remembers” it while it prepares to adapt the throttle opening and other systems to allow the engine and automatic transmission to operate at settings that conform to the speed set by the driver.

While the above is quite a mouthful, all it basically means is that if the driver sets the cruise control system at, say, 50 mph, the PCM will make the required adjustments to the engine and fuel management systems, as well as control the automatic transmission in such a way that the vehicle maintains a road speed of 50 mph, regardless of gradients, bends, or traffic conditions until the cruise control system is either deactivated, or set to another speed.

As a practical matter, cruise control systems use either vacuum, or electro-mechanical devices to control the throttle. Electro-mechanical devices usually consist of a stepper motor that acts on the throttle plate by means of a cable, while vacuum systems use vacuum actuators that are operated via engine vacuum, and are regulated/controlled by means of a system of vacuum solenoids, check valves, and on some applications, a vacuum reservoir that serves to stabilize the vacuum that could be used for other, unrelated systems as well.

Thus, if a fault or malfunction occurs in the cruise control system on a GM application, and code P1568 – “Cruise Servo Stroke Greater Than Commanded in Cruise” is set, it means that the throttle control device has opened the throttle further than is required to maintain the speed set on the cruise control system, meaning that the set speed will be exceeded, sometimes dangerously so.

If on the other hand, a failure or malfunction in the cruise control system causes code P1568 – “Speed Control Unable to Hold Speed” to set on Ford, Jaguar, Kia, Lincoln, Mazda, Mercury, Saturn, and Oldsmobile applications, it usually means that the device controlling the throttle is unable to maintain a throttle opening that conforms to the speed set on the system, which means that the applications’ actual road speed may exceed, or fall below the speed set on the cruise control system.

NOTE: On applications that use drive-by-wire throttle control technology, throttle control is still accomplished via the Throttle Control Actuator, but with data from the cruise control system, which “replaces” data from the Throttle Position Sensor(s). On applications that use a physical link in the form of a control cable between the accelerator pedal and the throttle, throttle control is accomplished by a dedicated control device that is directly controlled by the PCM when the cruise control system is activated.

The image below shows the principal components of a typical vacuum-operated non-adaptive cruise control system actuator. 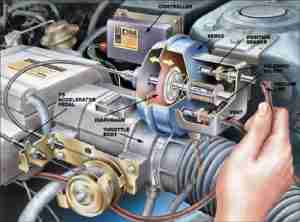 What are the common causes of code P1568?

Common symptoms of code P1568 could include the following-

How do you troubleshoot code P1568?

NOTE: Apart from a suitable code reader and a repair manual for the application being worked on, a hand-held vacuum pump fitted with a graduated gauge will be most helpful in diagnosing this code.

Record all fault codes present (including pending codes), as well as all available freeze frame data. This information can be of use should an intermittent fault be diagnosed later on.

NOTE: If any other codes are present along with P1568, and these codes relate to speed sensors in any way, there is a more than even chance that the speed sensor issue is the direct cause of P1568. Therefore, all such codes must be resolved as a first step in the diagnostic/repair procedure for P1568, since in the majority of cases, resolving speed sensor related problems would resolve P1568 as well.

NOTE: The deactivation switch must not be confused with the brake light switch, or with the safety cutout switch that prevents some manual applications from being started unless the clutch pedal is fully depressed. Make sure you identify the CORRECT switch to avoid misdiagnoses, confusion, and/or the unnecessary replacement of parts and components.

Once all relevant components and especially switches have been identified, perform a thorough visual inspection of all associated wiring, connectors, and vacuum lines.

Look for damaged, burnt, shorted, disconnected, and corroded wiring and/or connectors. Make repairs as required. In the case of vacuum lines, look for split, cracked, hardened, dislodged, or kinked lines, and make repairs or replace vacuum lines as required. Clear all codes after repairs are complete, and operate the vehicle with the cruise control system activated to see if the code returns.

If the code and/or symptoms return or persist, but all wiring and vacuum lines are free of damage, prepare to perform resistance, continuity, and ground connectivity checks on all wiring and electrical components, including switches located on the steering wheel.

Compare all obtained readings with the values stated in the manual, and make repairs as required to ensure that all electrical values fall within the manufacturers’ specifications. Clear the code after repairs are complete, and operate the vehicle with the cruise control system engaged to see if the code returns.

If the code and/or symptoms persist, and the code reader has control functions, use the scanner to command the throttle control device to open the throttle if the system is electro-mechanically operated. Check that the mechanism moves freely throughout its range of movement, and replace it if it shows any signs of binding or sticking, or if it does not move through its full range.

Check that the control cable is not binding, sticking, and that it is in good condition. There should be no fraying, or other damage to the cable that can inhibit the free movement of the throttle. If needs be, remove the cable from the vehicle to check its condition. Replace the cable if it is found to be in a less than perfect condition.

NOTE: If the scanner does not have control functions, consult the manual on the correct procedure to follow to apply a direct current to the actuator to check its performance/operation.

If the cruise control system is vacuum operated, consult the manual on the correct procedure to test the system. As a general rule though, this step involves attaching the vacuum pump to the point where the engine connects to the vacuum actuator, and drawing a vacuum to see if the diaphragm is not perforated or otherwise damaged.

If the vacuum holds steady, the actuator is good, but if the vacuum decays, however slowly, the actuator must be replaced. This step also involves testing all vacuum lines for leaks, as well as checking that all vacuum check valves allow the flow of air in only one direction. Replace any vacuum lines, vacuum check valves, or other vacuum operated components that do not perform as intended, or show signs of leaking. Clear all codes after Steps 5 & 6 are complete, and operate the vehicle to see if the code returns.

NOTE: Be sure NOT to exceed the vacuum that the cruise control system is designed to work on during this step. Doing so could result in misleading or incorrect test results, which will almost certainly result in misdiagnoses and the unnecessary replacement of parts and components.

The steps up to and including Step 6, should resolve code P1568 in nine out of every ten instances. However, if the code persists beyond Step 6 and it is certain that all wiring, speed sensors, control cables, vacuum lines, and vacuum operated components are good, suspect either a defective cruise control system control module, or a defective PCM.

Determining which controller is defective is not always easy, but it should be borne in mind that the cruise control system control module is far more likely to fail than the PCM is. Therefore, the PCM should NOT be replaced unless all other possible causes of P1568 have been investigated. In any event, if a defective control module is suspected, the wiser option would be to refer the vehicle to a competent repair shop for professional diagnosis and repair.

Related codes are mostly manufacturer-specific. If other codes are present along with P1568, refer to the manual for the affected application to determine the definition, and possible relationship between any additional codes and P1568.

Other Manufacturer Specific Definitions for P1568