OBD II fault code P1542 is a manufacturer-specific trouble code that is defined by carmakers BMW and MINI as, “Pedal Position Sensor Electrical”, and is set on these applications when the PCM (Powertrain Control Module) detects an abnormal electrical value in the throttle position sensor’s control and/or signal circuits.

NOTE: On BMW and MINI applications, the PCM (Powertrain Control Module) is known as the DME (Digital Motor Electronics).

On the vehicles listed above, there is no mechanical linkage such as a control cable between the throttle pedal and the throttle blade. Instead, these applications are fitted with so-called drive-by-wire throttle control systems that use electric motors to control the movement of the throttle blade.

For this system to work as designed, however, the input signals from the pedal position sensor have to be valid, accurate, and plausible, and to ensure the integrity of all signals entering and leaving the throttle pedal positions sensor, the DME monitors all implicated electrical circuits continuously. These checks include looking for and recording spikes and dips and both voltage and current, as well as intermittent or sporadic breaks in continuity.

When the DME detects abnormal electrical values or breaks in continuity that exceed maximum allowable thresholds, it will recognize that it cannot control the throttle effectively, and it will set an appropriate throttle control-related fault code and illuminate a warning light. Note that in many instances of code P1542 on the applications listed above, the DME will also initiate and maintain a fail-safe or limp mode as a safety precaution.

In most cases, the DME will severely limit the engine speed and lock an automatic transmission into second or third gear, but in all cases, the limp mode will persist until the fault is found and corrected, with corrective action including performing specified throttle control and idle speed relearning procedures.

Where is the P1542 sensor located? 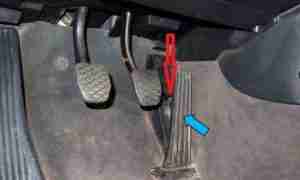 This image shows the throttle pedal (blue arrow) on a BMW Z4 application, with the red arrow showing the mechanical linkage between the pedal and the actual pedal position sensor, which is built into the black plastic enclosure behind the pedal.

Note that while it is possible to replace the pedal position sensor on almost all BMW and MINI models on a DIY basis, the replacement sensor has to be integrated into the larger throttle control system in all cases. Note, though, that while this is (sometimes) also possible to do on a DIY basis, the procedure can typically only be performed with dealer-grade diagnostic equipment and up-to-date software. Therefore, the better option is to seek professional assistance with diagnosing, replacing, and/or programming of any suspect component(s) in throttle control systems on BMW and MINI applications.

What are the common causes of code P1542?

The most common causes of code P1542 on listed applications are largely similar across all applications, and could include one or more of the following-

Common symptoms of code P1542 are similar across all listed applications, and could include one or more of the following-

Hello Andy. Although I do not doubt the ign switch could cause all kinds of codes, I believe the cause is a different component. For these set of particular codes, check your mass air flow sensor for proper operation. Check for around 3 grams per second up to 20 when you snap the throttle. The second thing to check is the engine intake air duct pipe boot. If the air pipe is leaking anywhere, it could cause any which of these codes.

Pushing this code. I dont know what it means.