For this reason, non-professional mechanics are strongly urged to read the section in the manual for the application to gain at least a working knowledge of the basic operation of the EVAP system in use on the application being worked on before attempting a diagnosis of ANY EVAP system related trouble code. Failure to do this could result in confusion, misdiagnoses, and sometimes, higher-than-expected repair bills. END OF SPECIAL NOTES.

OBD II fault code P1494 is a manufacturer specific code that is defined by car makers Chrysler, Dodge, Jeep, and Plymouth as “EVAP Leak Detection Pump Pressure Switch Condition”, or sometimes as “Leak Detection Pump SW or Mechanical Fault”, or less often as “Mechanical Incorrect input state detected for the Leak Detection Fault Pump [LDP] Pressure Switch”, depending on the application and manufacturer. Note however that the above definitions all have the same basic meaning, which is that code P1494 sets when the PCM (Powertrain Control Module) has detected a malfunction in the LDP ([EVAP] Leak Detection Pump) itself, as opposed to when a leak in the EVAP system is detected.

NOTE: Regardless of the EVAP system design, all manufacturers use dedicated codes to indicate leaks in the EVAP system, with the code that is present indicating the size of the leak.

All EVAP (Evaporative Emissions Control) systems have the purpose of capturing and containing fuel vapors in a sealed system before they can escape into the atmosphere, and while most EVAP systems use a vacuum to periodically test the integrity of the system, some applications use a dedicated air pump (known as the Leak Detection Pump) to pressurize the system to about 0.25 PSI during self-test cycles to detect leaks through which fuel vapors can escape from the system.

In terms of operation, a diaphragm-operated LDP consists of a sealed container that is divided into two halves by the diaphragm that is held down by a spring. The bottom half of the container is connected to the EVAP system, and one side of an opening to let in atmospheric air, while the top half of the container is ported to the engine vacuum and the other side of the opening to the atmosphere. The diaphragm is also connected to a small metal shaft that serves to trip a magnetic reed switch between ON and OFF states as the diaphragm moves up and down during the pumping cycle. The reed switch is used by the PCM for diagnostic purposes, but it also indicates the position of the diaphragm to the PCM, with the position of the diaphragm serving as the trigger mechanism for the LDP solenoid during normal operation.

In the fully down position, the diaphragm keeps the LDP pumps’ internal vent valve open, which allows for normal purging of the EVAP system to occur. When a self-test of the EVAP system is initiated, the EVAP purge is closed, the solenoid is energized, and engine vacuum pulls the diaphragm all the way up. When this happens, the red valves’ magnetic field breaks, which in turn, alerts the PCM with a 12-volt signal to deactivate the solenoid. Note that the solenoid does NOT act on the pump diaphragm directly- all the solenoid does is serve as a valve that either allows, or prevents engine vacuum from entering the upper half of the pump chamber, depending on whether the solenoid is energized or not.

From this point on, the pumping action is accomplished /continued by repeating the cycle at a high frequency, but as the pressure in the EVAP system increases, the pumping cycle slows down. The PCM counts the number of pumping cycles and based on whether it actually slows down or continues at the same rate for a specified amount of time, the PCM can determine not only whether a leak exists in the EVAP system, but also the size of the leak, based in turn on how fast the pressure is escaping, or by how long the LDP needs to run to maintain a specified pressure in the EVAP system.

Nonetheless, as stated before, code P1494 is less concerned with leaks in the EVAP system than it is with whether the Leak Detection Pump is working or not. Thus, if the PCM detects that the state of the reed switch (aka control switch) has not changed when a self-diagnostic cycle starts due to a failure of the diaphragm, the control solenoid and/or its control circuit, or the control switch, it will set code P1494 and illuminate a warning light.

The image below shows a simplified schematic of the internals of a typical Leak Detection Pump, such as is common on many Chrysler, Dodge, Jeep, and Plymouth applications. Note the position of the control solenoid pintle, circled in red in this image. In this position, the solenoid is preventing engine vacuum from acting on the diaphragm; energizing the solenoid opens the engine vacuum circuit, which sets the pumping action or cycle in motion.

Note however that when the self-test cycle first starts, the PCM ignores signals from the control switch until the pressure in the EVAP system reaches a value specified for that application, at which point the PCM will start counting the pump strokes, as well measure the interval between signals from the control switch to determine whether or not a leak exists in the EVAP system. 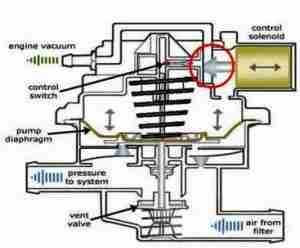 What are the common causes of code P1494?

Typical causes of P1494 could include the following-

Apart from a stored trouble code and an illuminated warning light, the only other noteworthy symptoms of code P1494 may be the presence of a strong fuel odor as vapors are released from leak sites, and that the vehicle may not pass an emissions test. Note that this code very rarely produces driveability issues.

How do you troubleshoot code P1494?

SPECIAL NOTES: Non-professional mechanics should take note that even though the EVAP leak detection system on some applications may be in perfect working order, it is entirely possible in some cases for a vehicle to fail an emissions test because one or more of the environmental factors that are required for the EVAP leak detection monitor to run is /are not present, or cannot be met.

Typical (required) conditions include the fact that the intake air temperature must be the same as, or close to the engine coolant temperature, the vehicle speed must be below 35 m/ph, the barometric pressure must be at least 22 in.hg (inches of Mercury), the ambient temperature must not be lower than 400F, or higher than 860F, and the fuel tank must be between 15% and 85% full. If just one of the conditions listed here is not met, the leak detection monitor will not run until such time as that particular condition is, or can be met.

Therefore, the leak detection monitor on vehicles that are operated in or at extreme altitudes and temperatures may never be able to run, which is made worse by the fact that if EVAP codes are erased (or the battery is disconnected), one or more EVAP monitors will show as “Monitor Incomplete”, which means that the vehicle will also fail an emissions test. END OF SPECIAL NOTES.

NOTE #1: Diagnosing code P1494 correctly requires that all vacuum lines from the source on the engine, as well as all vacuum lines from and to the LDP, the fuel tank, charcoal canister, and purge valve be checked for kinks, restrictions, or other damage before a LDP is replaced, since some defects in vacuum lines could contribute to setting code P1494. In addition, other EVAP codes that may be present along with P1494  such as P0442 – “Small Leak Detected”, P0455 – Large Leak Detected”, and P0456 – Very Small Leak Detected” MUST be investigated and resolved before a diagnosis of P1494 is attempted, or the LDP is replaced in an effort to resolve P1494.

NOTE #2: Be aware that EVAP monitors are among the most difficult monitors to reset, since resetting requires some very specific environmental factors / criteria to be present on the one hand, and equally specific drive-cycle events need to occur, on the other hand. Moreover, the number of cold starts required before some EVAP monitors will reset automatically varies between applications, so consult the manual for the application for detailed information if one or more EVAP monitors prove difficult to reset.

NOTE #3: Apart from a repair manual for the application being worked on, a graduated vacuum gauge is required item to diagnose P1494 accurately.

If the engine does not supply a vacuum of at least 13 in/Hg, check the entire vacuum system for leaks or damage that could conceivably influence the vacuum required by the LDP, and make repairs as required. Repeat this step after repairs are complete to verify that the correct vacuum is available to the LDP.

If the code persists but the correct vacuum is available to the LDP, switch the ignition off, and disconnect the connectors on both the PCM and the LDP. Refer to the manual to identify the LDP Switch Sensing Circuit, and test the resistance of this wire between the connectors, which must be less than 5 Ohms. If the resistance is below 5 Ohms, inspect the wire for an open circuit, and make repairs as required.

If the resistance is more than 5 Ohms, but below 100 Ohms, inspect the Switch Sensing wire for a short circuit to ground. Make repairs as required, and repeat both measurements to verify that all electrical values fall within the manufacturers’ specifications.

NOTE:  There are no other electrical measurements to make, except for those described in Step 5 if replacement of the LDP does not resolve the problem

If the code persists but all electrical values check out, reconnect all connectors, connect the scanner, and use it to view the state of the control switch with the ignition “ON” but the engine NOT running. At this point, it is not important if the LDP control switch is in the “ON” or “OFF” position.

If the code persists despite repeated repair attempts, consult the manual for detailed information on the conditions that are required for the leak detection monitor to run on that application, and follow the directions in the manual to test the control circuits of all sensors that are implicated for ground connectivity, resistance, reference voltage, and continuity.

Note however, that defects and malfunctions in these circuits will almost certainly be indicated with codes that relate to specific sensors/circuits, so if needs be, rescan the entire system to check for active or pending codes, as well as available freeze frame data that could have contributed to the setting of P1494. Make repairs/replacements as required, but bear in mind that PCM failures are rare, meaning that all diagnostic/repair avenues must be explored before any controller is replaced.

After repairs are complete, be sure to follow the directions in the manual with regard to the specifics of drive cycle events that must occur before codes can be cleared, or the leak detection monitor will reset automatically. Failure to follow the instructions exactly could prevent the monitor from resetting, especially in very high or low ambient temperatures. If the leak detection monitor refuses to reset, verify that ALL required conditions can be met- if not, wait until all conditions can be met before trying again.

I would like to add that on my 2000 Dodge Caravan in California the EVAP monitor is allowed to be incomplete [INC] per CARB [California Air Resources Board] and will not inhibit the vehicle from passing a smog check/test, however ALL other monitors must be complete. [OK]
[I am a 30 year veteran retired ASE Certified Diagnostic Technician.]
I don’t have access to shop diagnostic information anymore, which is why I came here.