The Exhaust Gas Recirculation (EGR) system is used by the Powertrain Control Module (PCM) to recirculate exhaust gases back into the intake manifold of the engine in order to take up space where air and fuel would be. This will actually cool the combustion process, thereby reducing oxides of nitrogen or NOx, a harmful by product of combustion.

The PCM turns the EGR valve solenoid on and off rapidly in order to control it during operation. There are only certain times when it needs to come on, like when the engine is warmed up (NOx emissions can start to form; combustion chamber temps must be above a certain level, usually recognized at 2500 degrees F), above idle (if not, idle driveability would suffer), but below wide open throttle, as this would decrease maximum power output of the engine. A position sensor indicates how far the valve has moved. When the PCM pulses the EGR solenoid on to a set location but does not see it reach that set location via the position sensor, code P1491 is set in memory.

Code P1491 is a manufacturer specific code, mostly utilized by Honda, Acura and Isuzu. For other manufacturer specific codes for other vehicles, please see the “Related Codes” section of this article. In this instance, code P1491 will set when the PCM pulses the EGR solenoid at a set duty cycle for a specific percent lift but does not see it reach that set location or lift via the position sensor.

For the Nissan / Infiniti vehicles with the vacuum cut valve by-pass valve code P1491,  see the “Related Codes” section for a detailed explanation. 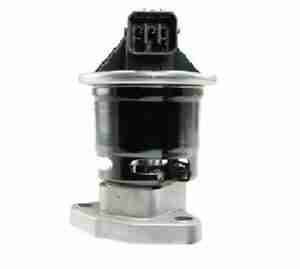 What are the common causes of code P1491?

How do you troubleshoot code P1491?

First, take a look and see if there are any technical service bulletins (TSB) for your particular vehicle. There may be an update, or known fix put out by the manufacturer that can save you from wasting time and money.

Next, see if there are any other diagnostic fault codes. Diagnose current faults first, in the order in which they are stored. Misdiagnosis occurs when this code is diagnosed when it is a stored code, especially while other codes are active. If these codes are present, diagnose them before attempting to diagnose the P1491. Also, don’t forget these are notorious for carbon deposits under the EGR valve, extending into the intake manifold passages. If the opportunity arises to remove the EGR valve and clean the passages to the intake manifold, do so.

If the P1491 is the only active fault code present, and there are no updates/TSBs for your particular vehicle, then the next step is to locate the EGR Valve / Lift sensor / position sensor. You can usually find the EGR valve mounted between the intake and exhaust manifold of the engine. Once located, visually inspect the connectors and wiring. Look for chafing, rubbing, bare wires, burn spots or melted plastic. Pull the connectors apart and carefully inspect the terminals (the metal parts) inside the connectors. See if they look corroded, burnt or possibly green in color versus the normal metal color you are probably used to seeing. You can get some electrical contact cleaner at any parts store if cleaning of the terminals is needed and a light plastic bristle brush to clean them with. Afterwards let them air dry, get some dielectric grease and put a light coat on where the terminals come into contact.

Once you have done that, clear codes, take the vehicle on a short 15 – 20 minute test drive, and see if the P1491 code returns. If it does not, then the connections were most likely your problem.

If the P1491 code does return, we will need to test the EGR valve and its associated circuits. Typically, there are 5 or 6 wires at the EGR valve.

For this code, the easiest thing to do unplug the EGR valve connector. With the scan tool hooked up, see if code P1498 EGR Valve Position Sensor Circuit High is now active after 30 seconds. If this happens, then the wiring, EGR valve/position sensor and PCM are good. The most likely problem is the EGR valve / solenoid.

If the P1491 code stays active and the P1498 does not set, we will need to test the sensor’s / solenoid’s associated circuits. At this point it may be wise to seek assistance from a trained automotive diagnostician. And remember, PCMs must be programmed, or calibrated to the vehicle in order to be installed correctly.

Other manufacturers versions of P1491 are:

Other Manufacturer Specific Definitions for P1491

I gotta 2001 jeep grand Cherokee and this code came up and it won’t run now what does this mean?

For Jeep, DTC P1491 is Radiator Fan Control Relay Circuit Malfunction, which refers to the cooling fan relay. This is a common problem on the 99-03 Grand Cherokee. The relay is located under the right headlight unit (sort-of). As long as the circuit between the ECM and the relay are sound (0 Ω end to end and infinite Ω across each other and to ground), then you can probably replace the relay.

What motor does the jeep have?