SPECIAL NOTES: While the descriptions and definitions of all trouble codes are strictly defined by law on all cars made and sold in the USA, this requirement does not apply as strictly to markets outside of the USA. As a result, some manufacturers outside of the USA define and describe some trouble codes, differently, although the underlying problem remains the same, regardless of the actual definition used.

Trouble code P145C is an excellent case in point. In this case, the definition as it applies to US-made Acura vehicles is “Fuel Tank Pressure Sensor Range/Performance Problem” while in the Japanese and some other Asian markets, the definition for this code is “Evaporative Emission (EVAP) System Purge Flow Malfunction”. Over time, the two different definitions have become somewhat ambiguous, with some databases listing one only or the other, which understandably, has the potential to create much confusion.

Nonetheless, both definitions refer to a problem with the fuel tank pressure sensor, and in this article, we will only use the definition as it applies to the US market to avoid creating more confusion. END OF SPECIAL NOTES.

OBD II fault code P145C is a manufacturer-specific trouble code that is defined by carmakers Honda and Acura as “Fuel Tank Pressure Sensor Range/Performance Problem”, and is set when the PCM (Powertrain Control Module) detects an implausible, incorrect, or unexpected pressure reading from the fuel tank pressure sensor.

All OBD II-compliant vehicles have to have a system that captures, contains, and eventually conveys fuel vapors generated in the fuel system to the engine to be combusted as a part of the air/fuel mixture without any fuel vapors escaping into the atmosphere. While this system goes by many names, they have become known by the generic term EVAP or Evaporative Emissions Control System.

In practice, these systems have significant design differences and technical implementations even on a single make of vehicle, but for the most part, all EVAP systems contain and use largely the same parts and components. These include the fuel tank itself, a charcoal-filled canister that absorbs and traps fuel vapors, a purge valve, a vent valve, a sealed fuel filler cap, one or more pressure sensors, and various lines and hoses that transport the purged fuel vapors to the engine.

In a fully functional EVAP system, the PCM monitors the fuel vapor pressure in the fuel tank via one or more dedicated pressure sensors. When the pressure reaches a predefined level or threshold, the PCM opens a normally closed purge valve, while at the same time, opening a normally closed vent valve. This allows the engine vacuum to “suck” the collected and trapped fuel vapors out of the charcoal canister, with fresh ambient air entering the system through the now open vent valve assisting with “pushing” trapped fuel vapors out of the canister and toward the engine.

When the PCM detects that the pressure in the fuel tank had reduced to below a predefined level or threshold, it concludes that all (or most) of the collected fuel vapors had been successfully purged from the fuel tank. At that point, the PCM will close both the purge and vent valves to allow the charcoal canister to begin collecting and trapping fuel vapors in preparation for a new purge cycle.

In practice, the accuracy and plausibility of pressure readings from the fuel tank pressure sensor are critically important, since this sensor provides the only input about (pressure) conditions in the fuel system to the PCM. Thus, if the PCM detects an implausible, inaccurate, unexpected, or rapidly fluctuating signal from the fuel tank pressure sensor (as opposed to receiving no signal at all), it will recognize that it cannot control or manage the EVAP system effectively, and it will set code P145C, and illuminate a warning light as a result.

Where is the P145C sensor located? 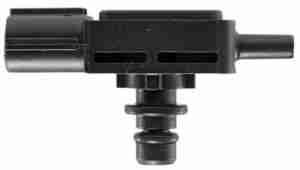 This image shows the fuel tank pressure sensor from a 2009 Honda Civic application.

Note that since the appearance and location of fuel tank pressure sensors on Honda and Acura applications vary greatly, it is not possible to provide accurate information on the locations of these sensors for all, or even most Honda and Acura models.

As a result of the above, we do NOT recommend that non-professional mechanics attempt these procedures not only because of the high risk of fire, but also because these procedures require special tools, equipment, and an above-average technical ability. Thus, if you suspect that you are dealing with a faulty fuel tank pressure sensor, the wisest course of action would be to seek professional assistance with diagnosis and repair.

What are the common causes of code P145C?

NOTE: While issues like leaking fuel filler caps, stuck open or closed vent/purge valves, or broken charcoal canisters can contribute to the setting of code P145C, these issues (if present) will typically be indicated by the presence of one or more codes other than P145C.

What are the symptoms of code P145C?

If other EVAP elated codes are present, additional symptoms could include one or more of the following-