OBD II fault code P144A is a manufacturer-specific trouble code that is defined by carmaker Ford as “EVAP System Purge Vapor Line Restricted/Blocked”, and is set when the PCM (Powertrain Control Module) detects that the EVAP vacuum line that transports fuel vapors to the engine is blocked or restricted. Note that the term “EVAP” is a kind of shorthand for “Evaporative Emissions Control System”.

The purpose of the EVAP system in all applications is to trap and contain fuel vapors within the system until engine-operating conditions are such that the trapped vapors can be transported to the engine to be combusted as part of the air/fuel mixture. While design specifics vary, EVAP systems generally consist of the fuel filler cap, the fuel tank, various flow, and pressure sensors, purge and vent valves and their associated solenoids (that are electronically controlled); a charcoal canister, various pipes, hoses, and vacuum lines, and electrical wiring.

When the EVAP system is not in purge mode, both the vent and purge valves are closed, which has the effect of sealing the fuel system off from the atmosphere. As the fuel generates vapors, the vapors are absorbed by the activated charcoal in the charcoal canister until the vapor pressure approaches a predefined limit. When this happens in a fully functional system, the PCM opens both the purge valve and the vent valve to allow the engine vacuum to draw the accumulated vapors into the engine. Note that the purpose of opening the vent valve is to allow ambient air under atmospheric pressure to assist in “pushing” the collected vapors from the charcoal canister.

In all EVAP designs, including those on Ford applications, the vapors are transported to the engine via a dedicated vacuum line. Since this line is connected to the intake system, the engine vacuum “sucks” the vapors from the fuel system into the engine, and in a fully functional EVAP system, the rate of flow (of the fuel vapors) is inferred by the PCM based on the rate at which the pressure in the fuel tank decreases, as reported by the fuel tank pressure sensor.

Since the PCM cannot monitor this particular vacuum line directly, it infers whether (or not, as the case may be) it is open or restricted based on inputs from various sources apart from the fuel tank pressure sensor. For instance, if all expected electric values are within specified ranges, the PCM will conclude that both the purge and vent valves and other electrically operated components are working as expected. Therefore, if the fuel vapor pressure in the fuel tank does not decrease if both the purge and vent valves are commanded open, the PCM will conclude that the vapor line is blocked or restricted in some way.

When the PCM detects or deduces this condition, it will set code P144A and depending on the vehicle, may or may not illuminate a warning light on the first detection.

Where is the P144A sensor located? 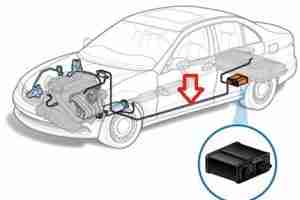 This image is a generic schematic representation of an EVAP system on a typical Ford passenger vehicle. In this image, the red arrow indicates the vacuum line that transports fuel vapor to the engine, while the object indicated by the blue circle is the charcoal canister. Note that while this vacuum line can become restricted for several reasons, charcoal grains released by damaged charcoal canisters is a leading cause of this condition.

Note though that since the layout of EVAP systems varies greatly between Ford applications, we strongly recommend that you seek professional assistance with the diagnosis and repair of this code. Working with, or on EVAP systems often, if not always, results in both exposure to liquid fuel, and spillage of some fuel, so play it safe and do NOT attempt repairs on this system because of the high risk of starting a fuel fire.

What are the common causes of code P144A?

What are the symptoms of code P144A?

Typical symptoms of code P144A include the following, but note that this code seldom, if ever, causes serious or even noticeable drivability issues