SPECIAL NOTES: Non-professional and inexperienced mechanics should note that the “Control Valve” referred to in most, if not all definitions of OBD II code P1443, is the “purge”
control valve, and NOT the “vent” control valve, which has an entirely different function. In short, the purge control valve controls the flow of fuel vapors to the engine, while the vent control valve allows ambient air to enter the EVAP system to assist in displacing fuel vapors towards the engine to be combusted under certain operating conditions.

Also, note that on many applications mechanical failure, or other issues with the EVAP purge control valve is indicated by the following generic OBD II codes-

Regardless of whether the code (P1443/P0443) is generic or specific, the diagnostic/repair procedure(s) for both codes are similar, if not identical. END OF SPECIAL NOTES.

The function of the EVAP system is to trap, contain, and convey fuel vapors through a purge control valve to the engine to be combusted before the vapor can escape into the atmosphere to contribute to environmental degradation.

As fuel evaporates, the resulting vapors increase the pressure in the EVAP system until it reaches a predefined level, at which point the PCM will command the purge control valve open to allow the engine vacuum to “suck” the vapors in the system into the inlet tract to be combusted, and while there are some design differences between applications, all EVAP systems achieve the same result, which is to reduce, if not eliminate evaporative emissions.

However, since the introduction of fuel vapor directly influences the composition of the air/fuel mixture by enriching it, the PCM will typically only activate the purge control valve under certain, very specific engine operating conditions such as during hard acceleration when additional fuel may be required, or when the fuel vapor pressure reaches predefined levels, which is measured by a dedicated pressure sensor. When this happens, the PCM controls the purge valve in such a way that the pressure is bled off slowly, and only when the engine is running at, or above predefined RPM’s. Note that in a fully functional system, fuel vapor is never introduced into the inlet tract when the engine is idling.

In all cases where the purge control valve is activated though, the PCM makes adjustments to fuel trims to ensure that the overall air/fuel mixture remains as close to the ideal 14.7:1 ratio as possible. This aspect of engine/fuel management is monitored and controlled by the #1 (upstream of the catalytic converter) oxygen sensor(s) that analyze(s) the composition of the exhaust stream on a continual basis. In modern systems, oxygen sensors react almost instantly to changes in the air/fuel mixture, which reactions are communicated to the PCM (via changes in a signal voltage) to enable the PCM to make appropriate adjustments to ignition timing, valve timing, and injector pulse width to maintain maximum efficiency while using the least amount of fuel.

From the above it should be clear that the correct functioning of the EVAP purge control valve plays a crucial role both in maintaining engine efficiency while reducing emissions, and during self-tests of the EVAP system when depending on the application, the EVAP system is either evacuated, or pressurized. Thus, when the PCM detects a malfunction of the purge control valve it will set a code, and illuminate a warning light. 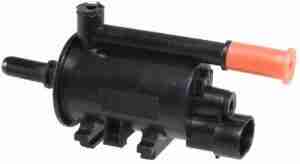 What are the common causes of code P1443?

Common causes of code P1443 could include the following-

Depending on the exact nature of the problem, possible symptoms of this code could include the following-

How do you troubleshoot code P1443?

NOTE #1: On many applications, the EVAP purge control valve is located either directly on the engine, or at various points inside the engine compartment, and long experience has taught that nine times out of ten, the cause of premature failure of the purge valve can be ascribed to high under-hood temperatures combined with the vibrations of the engine. In cases where the purge valve cannot be moved off of the engine to a somewhat cooler location, fabricate a heat shield with some thin aluminum foil (such as the foil found in DIY exhaust repair kits) to protect the purge valve as much as possible.

NOTE #2: Apart from a repair manual for the application being worked on, you will a hand-held vacuum pump fitted with a gauge to diagnose this code.

NOTE #3: Clear all codes and rescan the system after each step in the diagnostic/repair procedure to ensure a successful repair.

NOTE: Be aware that if other EVAP related codes are present along with P1443, these codes are often the result of P1443, rather than the cause. Therefore, if code P1443 is accompanied by other codes check if the other codes follow P1443; if they do, they are the result of this code, and they will likely clear automatically when P1443 is resolved. However, all codes that precede P1443 must be resolved before an attempt is made to diagnose and repair P1443.

Consult the manual to locate the EVAP purge control valve, as well as all associated wiring, hoses, and connectors.

Regardless of whether the purge valve is located inside the engine compartment, on the engine, or somewhere else, perform a thorough visual inspection of the valve and all associated hoses and wiring. Look for cracked, split, hardened, or degraded hoses, and make repairs as required. At the same time, look for damaged, burnt, shorted, corroded, or disconnected wiring and/or connectors. Make repairs as required.

If no visible damage to the valve, hoses, and wiring is found, consult the manual to determine the function of each wire and perform resistance, ground, and continuity checks on all associated wiring. Pay special attention to the value of the input current- this value should match the value specified in the manual exactly, or the valve might not work as intended. Make repairs as required if a discrepancy is found, and recheck the input voltage again to ensure that it falls within specification.  Compare all other obtained readings with those stated in the manual, and make repairs as required to ensure that all electrical values fall within the manufacturer’s specifications.

Note that the purge valve itself forms part of the control circuit, and as such, its internal resistance must be checked as well. Consult the manual for the correct resistance value, and replace the valve if its resistance does not agree with the manufacturers’ specifications.

NOTE: On most applications, the purge valve is activated when the PCM closes the ground circuit. Consult the manual on the correct procedure (KOER/KOEO) to establish the ground connection. Also, be sure to disconnect the purge valve from the PCM during resistance and continuity checks to prevent damage to the controller.

If the wiring, hoses, and the valve solenoid’s resistance check out OK but the code persists, it is likely that the valve either does not close properly, or that long-term exposure to heat and vibration has degraded the valve seat(s).

Remove the valve from the vehicle to make testing easier. First, apply direct current to the solenoid to verify that it reacts to an input voltage, but be sure to consult the manual on the required voltage, and make sure that the solenoid is properly grounded. Note that while this test can be performed with the scanner (if the scanner has control functions), doing this test manually allows for easier attachment of the vacuum pump.

Next, attach the vacuum pump to one of the barbs on the valve, and pull a vacuum that registers on the gauge. If the valve is closed, does not leak past its seat, and the test equipment is not defective, the vacuum should hold almost indefinitely. If the vacuum starts to decay almost immediately, however slowly, the valve is defective and must be replaced.

Nonetheless, while the vacuum holds, apply direct current to the valve again. The vacuum should decay almost instantly as the valve opens- if it does not, the valve is also defective, and must be replaced.

If the purge valve is defective, avoid replacing it with aftermarket parts, and especially if the valve is located inside the engine compartment, where the harsh conditions could destroy a valve bought online in short order. OEM parts may not be perfect, but they are almost certain to outlast any aftermarket replacement.

When replacing a purge valve, make sure that all hose connections are made to industry standards to prevent setting other EVAP related codes, which could also prevent the vehicle from passing an emissions test. Once all repairs are complete, clear all codes, and operate the vehicle for at least one complete drive cycle (as described in the manual), with a scanner connected to observe the working of the EVAP system in general, and the working of the purge valve in particular, in real time.

Assuming that all the other components of the EVAP system are working correctly, it is unlikely that code P1443, or any other code will return, provided of course that the drive cycle is completed correctly. If P1443 does return however, it is almost certain that the cause is an intermittent fault, rather than PCM failure.

Be aware that intermittent faults can be extremely challenging and time consuming to find and repair and in extreme cases, it might be necessary to allow the fault to worsen before an accurate diagnosis, and definitive repair can be made.

As stated previously, the definition of code P1443 is sometimes enhanced by a manufacturer with a qualifier such as “Evaporative Emission Control System Control Valve (low/no flow)” in the case of some Ford models, and “EVAP Purge Control (Solenoid 2 Circuit)”, in the case of Chrysler, Dodge, and Jeep.

Note however that there are still other manufacturer specific definitions of P1443 that describe issues with the EVAP purge control valve, such as the following on some Lincoln and Mazda models-

NOTE: To avoid confusion, non-professional mechanics are strongly urged not to develop an over reliance on online OBD II code lists when researching any EVAP system related fault code, since much of the confusion surrounding the definitions of some codes originates from online lists that are often copies of copies that are reproduced from non-official sources. The wisest course of action when researching a trouble code is either to refer to the manual for the application, or to consult with the authorized dealer of the vehicle, who has, (or should have), the relevant technical information.