OBD II fault code P1389 is a manufacturer specific code, and on some applications, this code is defined as “Glow Plug Circuit High Side, Low Input”, and is set when the PCM (Powertrain Control Module) detects an abnormal input voltage in the “high side” of the glow plug control circuit on diesel engines. The term “high side” in this context (definition) refers to an electronic circuit that uses sophisticated switching mechanisms to control each glow plug individually.

Note that although all diesel engines use glow plugs to preheat the air/fuel mixture to assist in detonation when the engine is cold, code P1389 does not apply to all glow plug control systems. On older applications, all the glow plugs on an engine are heated simultaneously via a relay and a timer, and while this method achieves the desired result, one consequence is excessively long warm up times and reduced component life.

With the advent of diesel engines in the luxury vehicle market, it became necessary to reduce glow plug warm up times, and one way of doing this is to use dedicated glow plug control modules that use MOSFET (Metal Oxide Semiconductor Field-Effect) Transistors as “high-side” load switches to either connect or disconnect a power source (vehicle battery) individually to a load, in this case, each individual glow plug.

To make the system deliver the significant current required to heat up a glow plug, modern glow plug control modules incorporate “charge pumps”, which are a kind of DC-to-DC converter that uses capacitors as energy storage devices to act as power sources. The main advantages of these systems is that energy efficiencies as high as 90 – 95% can be achieved with relatively simple electronic circuitry, and that component life is greatly extended.

In practical terms, the PCM delivers information such as the engine temperature and barometric pressure to the Glow Plug Control Module, which uses this information to calculate appropriate pulse width modulation strategies to control each glow plug individually. Moreover, modern glow plug control modules have the ability to perform diagnostic functions on each individual glow plug by monitoring parameters such as battery voltage, charge pump supply voltages, junction temperatures, the condition of each “high-side” switch, and the actual current that flows through each individual glow plug.

Faults and discrepancies from design parameters are communicated to the PCM, which will store a fault code, and trigger a warning light when fault data is received from the glow plug control module.

The image below shows a typical modern glow plug control module, and the glow plugs with their individual leads. Note the inset showing that glow plugs can be heated to full operating temperature within as little as two seconds, in contrast to older systems that sometimes required up to 10-15 seconds to heat up a glow plug. The practical effects of decreased glow plug warm up times is that diesel vehicles fitted with this system can be started almost immediately even in sub-zero temperatures, and that diesel exhaust emissions are reduced as a result. 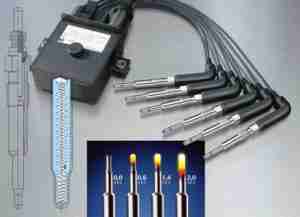 What are the common causes of code P1389?

Common causes of code P1389 are mostly make and model specific, but short circuits caused by damage to wiring, and corroded wiring and/or connectors are common causes across all applications. Refer to the manual for the application being worked on for specific information on possible causes of this code as it relates to that particular application. Note that PCM failure is a rare event, and the fault must be sought elsewhere before any controller is replaced.

The most common symptom of this code is a stored trouble code and an illuminated warning light. Other symptoms are mostly make and model specific, but could include the following-

NOTE: Be aware that not all symptoms listed here may be present on all applications all of the time, and that the severity of some symptoms may vary between applications.

How do you troubleshoot code P1389?

NOTE #1: The definition of this code indicates an issue on the “high side” of the glow plug control module circuitry, and as such, the problem involves electronic components/circuitry that can usually not be repaired reliably.

NOTE #2: Glow plug control modules are designed for specific applications, and are therefore generally not interchangeable with control modules from other models within any given vehicle model range. As such, detailed diagnostic and repair information is almost always held “captive” by the authorized dealers, meaning that apart from sometimes being able to extract code P1389, non-professional or non-dealer technicians have extremely limited means to diagnose the root cause of this code.

NOTE #3: Because dealers do not share detailed diagnostic and repair information for this code with the independent automobile repair industry, the few basic steps outlined here are pretty much all the resources available to the non-dealer mechanic to diagnose and repair this code. Nonetheless, in most cases, the few steps outlined here will isolate the glow plug control module as the problem. Note that replacement of the glow plug control module is NOT guaranteed to resolve this code.

NOTE: Consult the relevant manual for the application on the basic operating principles of the glow plug control system, and scan the system for the presence of other codes (both active and pending) that are related to the sensors that supply the initial environmental information to the PCM. In most cases, these sensors relay the oil temperature and atmospheric pressure to the PCM, but it is possible that on some applications, the engine coolant temperature may also be involved.

Once it is certain that all relevant sensors are working properly, consult the manual on the location of the glow plug control module, as well as the function, and color-coding of each wire in the connector. Consult the manual on the correct procedure to establish the module ground and input circuits, and verify that the ground is sound and that the correct input voltage is present at the connector.

WARNING: Be sure to follow the directions in the manual during this step exactly to prevent damaging either, or both the PCM and the glow plug control module. Compare obtained readings with those specified in the manual, but if discrepancies are found, do NOT attempt repairs if the manual does not clearly describe repair options. Since the PCM is directly involved in glow plug control, it is more than likely that specialized equipment (and knowledge) will be required to test the relevant PCM circuits and functions. If the manual does not describe repair options, the safest option is to refer the vehicle for professional diagnosis and repair.

If all obtainable electrical values fall within specifications, suspect one or more defective glow plugs or glow plug leads. Note however that the definition of this code does NOT specify a specific area of the circuit in which a fault is present- only that there is an abnormal voltage somewhere in the “high” side of the control circuit.

However, it is almost inconceivable that all the glow plugs on an engine could have failed simultaneously, but having said that, it is possible that a failed or failing glow plug is the problem. Thus, prepare to test the resistance of each glow plug; in some cases, this may be possible to do without removing the glow plugs from the engine, but consult the manual on the correct procedure to perform this test. Replace glow plugs as required.

If all glow plugs test OK, consult the manual on the correct procedure to test each individual glow plug lead. Note however that since the glow plug control module uses pulse width modulation to control the input voltage to each glow plug individually, an oscilloscope may be required to test each lead. Also, be aware that to be able to interpret the displayed wave forms correctly, you will need access to the relevant waveform charts for that application.

Thus, if an oscilloscope or the relevant diagnostic reference data is not available, the better option is to refer the vehicle to an authorized dealer for professional diagnosis and repair. As stated previously, replacing the glow plug control module may resolve the issue, but bear in mind that the PCM could be implicated in the problem as well, meaning that replacing components is NOT a guaranteed remedy for this code.

This is not so much a step toward fixing the issue, as it is a recommendation to non-professional, as well as non-dealer mechanics not to proceed with the diagnostic procedure beyond Step 5 if the required equipment, knowledge, and reference data are not available. Proceeding beyond Step 5 under these conditions will almost certainly result in a misdiagnosis and possible fatal damage to the vehicle’s electrical system.

Other Manufacturer Specific Definitions for P1389