OBD II fault code P1349 is a manufacturer specific code that is defined by car makers Toyota and Lexus as “Variable Valve Timing System Malfunction Bank 1”, and is set on these applications when the PCM (Powertrain Control Module) detects a failure, defect, or malfunction in the VVT (Variable Valve Timing system on Bank 1. Note that Bank 1 refers to the bank of cylinders that contains cylinder #1 on V-type engines.

Although there major design differences between variable valve timing systems in use by different vehicle manufacturers, the function of these systems are largely the same, regardless of the application. In fact, all variable valve timing systems have two things in common, these being that a), retarding or advancing the camshafts relative to a fixed base setting can change the engines’ volumetric efficiency to produce more power at some engine speeds, and b), that changing the volumetric efficiency of an engine lets an engine develop more power, while reducing emissions and using less fuel, at the same time.

As a practical matter, the variable valve timing systems on Toyota and Lexus applications uses pressurized engine oil to activate an actuator that is attached to the intake camshaft. When the VVT system is not in operation, the valve timing operates at its base settings. However, when the system is activated, the PCM commands a control solenoid to open, which causes a metered amount of pressurized engine oil to act on the actuator. This in turn, causes the camshaft to rotate either with, or against its normal direction of rotation, which has the effect of either advancing, or retarding the phasing of the camshaft relative to a fixed, base setting.

Which direction the phasing is changed to depends on both the current operating conditions, and control inputs such as large throttle inputs. Nonetheless, when the system is activated, the practical effect is that the altered camshaft phasing causes the intake valves to open sooner, or to stay open longer, both of which conditions improve the airflow through the intake manifold and runners. This in turn, improves the mixing of the air and fuel, which in its turn, improves combustion and reduces emissions.

When the VVT system is deactivated, the pressurized engine oil is returned to the main circulation system via the oil control solenoid, and the actuator returns the intake camshaft to its base setting. It should be noted though that on some applications, the phasing of both the intake and exhaust camshafts can be altered both with respect to each other, and to fixed, base settings to produce a larger range of possible phase changes.

Regardless of the system though, when a defect, failure, or malfunction occurs anywhere in the VVT system, the PCM will recognize that it cannot control the VVT system effectively, and it will set code P1349 and illuminate a warning light as a result.

Where is the P1349 sensor located? 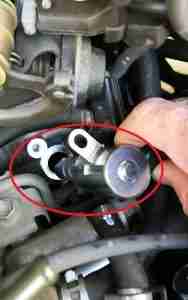 What are the common causes of code P1349?

The causes of code P1349 on Toyota and Lexus applications are many and varied, but could include one or more of the following-

The most common symptoms of code P1349 on Toyota and Lexus applications largely depend on the nature of the failure or defect, but could include one or more of the following-

It was very helpful, kudos to you