OBD II fault code P1330 is a manufacturer-specific trouble code that is defined by carmakers Hyundai, Kia, and Daewoo as “Spark Timing Adjust Signal Malfunction”, or sometimes as “ Spark Timing Adjust Signal”, and is set on the listed applications when the PCM (Powertrain Control Module) detects an open circuit or abnormal electrical signal in the ignition timing adjustment system.

In practice, the ignition timing control system on listed applications uses input data from multiple engine sensors, and all signals from all sources are combined in an open-loop* control system/configuration that is designed to accommodate variable environmental factors such as the ambient temperature, humidity, and atmospheric pressure, among others.

* In its simplest form, an open-loop control system uses feedback from one or more sources/sensors to exert control over the functioning of that system. An example of an open-loop system on cars is the feedback a PCM (Powertrain Control Module) obtains from heated oxygen sensors to control the air/fuel mixture.

However, a spark timing control system is vastly more complex than the above example, since it has to strike an appropriate balance between conflicting demands such as the need to maintain fuel efficiency while ensuring a high power delivery, as well as ensuring engine longevity while limiting exhaust emissions to below maximum allowable levels, at the same time.

Moreover, ignition spark control systems must also be stable, in the sense that fuel efficiency, power delivery, and emission levels (among others) must remain within acceptable levels even if environmental factors such as those mentioned above change. This is a tall order, so to accomplish this, all engine management systems are programmed with look-up tables that represent basic ignition timing strategies.

In practice, these strategies are based on factors like the engine design, engine displacement, the engine’s compression ratio, the size and mass of the vehicle, and the intended use of the vehicle. Nonetheless, the basic parameters include the following, but note that all are references to the need to maximize the engine’s power output per engine cycle-

Other important parameters include the point relative to TDC in the pistons’ travel (in the cylinder) when 50 percent of the air/fuel charge is combusted, as well as the point in the pistons’ travel at which the compression pressure in the cylinder is the highest, which is usually about three to five degrees after TDC- depending on the engine. Note that this should not be confused with the maximum combustion pressure, which occurs much later in the engine cycle.

For the purposes of this article, we can ignore the cycle-to-cycle variations in the ignition timing that occur as the result of normal engine operation, since these variations depend on many variables that in their turn, vary greatly even between identical engines.

Nonetheless, in a fully functional spark ignition control system, the single biggest determiner of current ignition timing settings is the current operating conditions. For instance, if the engine runs at say, 2000 RPM at a light load, the PCM will set the ignition timing to a value( relative to TDC) that produces the most power, while using the least amount of fuel and creating the least amount of exhaust emissions, at the same time.

If, however, the engine speed increases to say, 4000 RPM, the engine cylinders suck in vastly more air and fuel, which raises the peak compression pressure considerably. Thus, unless the timing control system advances the ignition timing to ignite the increased air/fuel charge earlier, the higher energy content of the increased volume of fuel cannot be utilized, since the higher engine speed reduces the time that is available for the combustion process to complete by a significant amount.

However, since higher compression pressures can, and do initiate the premature ignition of the air/fuel charge, modern engines are equipped with knock sensors that detect the sound of premature combustion.

So if we had to reduce an ignition timing control system to its simplest form, we could say that the primary input signal is the trigger signal the PCM receives from the crankshaft position sensor. This signal is then added to, and processed along with inputs from multiple engine sensors. This partially processed signal is then passed along to the PCM to compare it to several look-up tables, and only after these circuits are satisfied that an adaptation to the ignition is required (based on the current operating conditions) will the signal be passed to each cylinder’s ignition driver circuit, which will make the actual change to the ignition timing.

As a final step, each ignition driver circuit will then deliver a trigger signal to its associated ignition coil, which will then generate an ignition spark.

Although the above is a generic overview of the spark ignition control systems on the listed applications, it should obvious that there are not only many signals in this system that can suffer malfunctions and failures; there are also a great many points in these systems at which failures and malfunctions can occur.

Nonetheless, when a PCM detects any failure, malfunction, or defect anywhere in the ignition timing control system that affects the proper operation of the system, it will recognize that it cannot manage the ignition timing control system effectively. When this happens, the PCM will set code P1330, and illuminate a warning light, but note that in some cases, and depending on the nature of the problem, the PCM may also initiate a fail-safe or limp mode as a safety precaution.

Where is the P1330 sensor located? 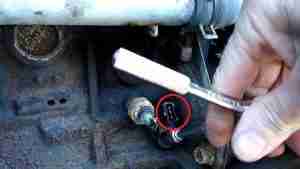 What are the common causes of code P1330?

Common causes of code P1330 on listed applications are largely similar and could include one or more of the following, but note that since the definition of this code contains no useful diagnostic information, investigating other codes that may be present along with P1330 first often yields valuable diagnostic clues about the root causes of P1330-