OBD II fault code P132B is a manufacturer-specific trouble code that is defined by carmaker Ford as, “Turbocharger/Supercharger Boost Control ‘A’ Performance Problem”, and is set when the PCM (Powertrain Control Module) detects a failure, defect, or malfunction the turbocharger’s boost control system.

While many, if not most car manufacturers have developed engines with both direct gasoline injection and forced induction via turbochargers, Ford has developed a system known as “Ecoboost”, which combines forced induction, direct fuel injection, and variable valve timing. As a practical matter, the technical implementation of these three systems is somewhat different on Ford applications than on other vehicle makes, which allows small-displacement Ford Ecoboost engines to develop significantly more power while using less fuel than directly comparable engines from other manufacturers.

Just like on any other forced induction engine, the boost pressure increases as the engine speed increases, and depending on both the size and displacement of any given Ecoboost engine, the maximum allowable boost pressure is both strictly defined, and precisely controlled with a microprocessor that controls a wastegate, or pressure relief mechanism built into the turbocharger via a vacuum controlled actuator.

By opening or closing the wastegate as required, the PCM will match the boost pressure to the engine speed and load to a) prevent engine damage through premature combustion of the air/fuel mixture, and b), maintain the boost pressure at a level that is calculated to ensure peak engine performance, while using the least amount of fuel. Moreover, by combining precise boost control with equally precisely controlled variable valve timing, the efficiency of most Ecoboost engines is increased to the point where exhaust emissions are about 15 percent lower than comparable engines (of other manufacturers) under similar operating conditions.

So while Ecoboost engines are measurably more efficient than non-Ecoboost engines, the Ecoboost system is not without faults and/or drawbacks. This is particularly true of V6 Ecoboost engines; while inline engines have only one turbocharger, V6 variants have a turbocharger on each bank of cylinders, with the most common problem on these engines being the boost control actuators. In theory, both turbochargers should spin at the same speed and therefore generate the same amount of boost, but in practice, defects, faults, and malfunctions in the boost control system often cause the turbochargers to spin at different speeds. See the section on “Symptoms” for more details.

Where is the P132B sensor located? 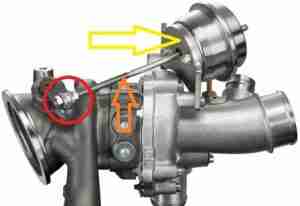 This image shows a turbocharger from a 2012 1.0L Ford Ecoboost engine, but there are several noteworthy things about this particular example, but before we get to specifics, let’s look at what the arrows mean-

In this example, the attachment point is a simple arrangement of locknuts, which indicates that this is an aftermarket turbocharger. On OEM Ecoboost turbochargers, this connection point is always enclosed in a cage that is painted to prevent tampering with the adjustment of the pushrod. This adjustment is crucially important for the correct operation of the turbocharger, but in many cases, car owners (and even professional mechanics) attempt to correct some types of boost control issues by adjusting the pushrod.

Not only does this never work, but also tampering with this adjustment almost always requires the replacement of the entire turbocharger, since these turbochargers are not serviceable. Therefore, if you ever notice that the adjustment of the pushrod on an OEM Ecoboost turbocharger had been disturbed, it is certain that somebody had attempted to correct an underlying issue with the boost control system.

What are the common causes of code P132B?

Some common causes of code P132B could include one or more of the following, but note that not all of the issues and problems listed below will set code P132B or other boost control issues –

What are the symptoms of code P132B?

Typical symptoms of code P132B are largely similar across all applications, and could include one or more of the following-

NOTE: All, or most of the above symptoms could also be present on V6 Ecoboost engines, but loud “whooshing” noises upon deceleration combined with a noticeable loss of power upon acceleration almost always indicate the fact that the two turbochargers are not rotating at the same speed. Be aware though that diagnosing this condition sometimes not only requires the use of advanced diagnostic equipment but also expert-level knowledge of the inner workings of the Ecoboost system.

WARNING: As with all Ecoboost turbochargers, the wisest course of action is to seek professional assistance with diagnosis and repair. This is because the complex operating principles and control systems of these turbochargers leave plenty of room for non-professional mechanics not only to make misdiagnoses and potentially expensive mistakes but also to inadvertently cause damage to the engine where there was none before.

I am not getting the boost sometime it works but most time not a lot if the boost comes in its about 4000revs which i think is late for a turbo i have had it on a code reader P132B i don’t know if its a easy fix or how much cost could be so any ideas will be good thank you….focus 1.0 ecoboots 2012 …