OBD II fault code P1260 is a manufacturer specific code that is defined by carmaker Ford as “THEFT Detected- Vehicle Immobilized”, and is set when the PCM (Powertrain Control Module) detects a violation of the PATS (Passive Anti-theft System) security protocols, which has disabled the engine.

Apart from the initial enable/disable signals, the PCM and instrument cluster also share all the security codes that were programmed into both during the initial installation, and the enable signal will only be confirmed when all the security codes have been checked and confirmed.  Therefore, if either the PCM or the instrument cluster fails for whatever reason, both the cluster and the PCM must be replaced and programmed together to enable the PATS system.

If the ignition key is turned to either the RUN or START position and the PATS system is fully functional, the THEFT indicator light will turn on and remain illuminated for three seconds before extinguishing automatically. If however a fault or issue exists in the PATS system, the indicator light will either remain illuminated, or start to flash, depending on the nature of the problem.

Where is the P1260 sensor located? 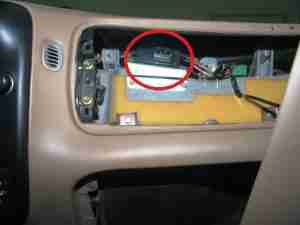 The image above shows the location (circled) of the PATS control module on a Ford Ranger. Note that while this module is equally easy to find on most Ford applications, the module is not user-repairable, and replacing it will usually not resolve the issue. In most instances of this code, dealer-grade diagnostic software and equipment is required to diagnose and/or reprogram the PATS system and ignition keys.

What are the common causes of code P1260?

It should be noted that code P1260 could be set by conditions other than actual theft conditions. For instance, low battery voltages, incorrectly performed jump-starts, or even simple battery replacements can all cause this code.

Other common causes of code P1260 could also include the following-

Other Manufacturer Specific Definitions for P1260