Special note on trouble codeP1125 and GM vehicles: While DTC P1125 is a manufacturer-specific code that may affect several OBD II compliant vehicles, the causes and symptoms of this code typically vary between most vehicle makes. This article will therefore deal with code P1125 as it applies specifically to GM vehicles.

On many GM products, the throttle control mechanism is of the drive-by-wire type, which means that there is no physical connection such as a control cable between the throttle pedal and the throttle body.

It should be noted though that while the definition of this code refers to throttle pedal position sensor faults, which suggests failures, defects, or malfunctions in one or more sensors, as opposed to miscorrelations between sensors, the fact is that failures, defects, or malfunctions in these sensors are primarily caused by excessive mechanical wear of sensor parts.

Therefore, while miscorrelations typically occur as the result of worn-out parts, OBD II systems cannot identify the actual parts that may be worn out, which explains why this code does not specifically refer to sensor miscorrelations, but to failures, defects, or malfunctions, that cause miscorrelations.

This is of course not the same as saying that mechanical wear is the only possible cause of code P1125 on all GM products, but is the primary cause of this code on older or high-mileage GM applications. For more information on other possible causes, see the Common Causes section.

Nonetheless, when the PCM detects any failure or malfunction in any sensor in the throttle pedal position sensor, it will recognize that it cannot control the throttle effectively, and it will set code P1125, and illuminate a warning light as a result. In some cases, and depending on the exact nature of the problem, the PCM may also initiate a “reduced Power” mode, which is GM-speak for a limp mode, which will persist until the fault is corrected.

Where is the P1125 sensor located? 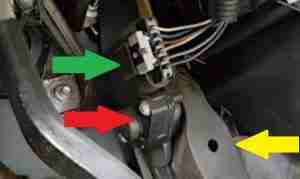 What are the common causes of code P1125?

NOTE #1: Be aware that diagnosing this code on GM applications typically requires the use of GM-specific diagnostic equipment, although it might be possible to extract some additional fault codes with a high-end scan tool. Since there are several sensors involved in throttle control, a dealer-grade scan tool with bi-directional controls is required to perform the 18 steps that must be completed in the correct order to make a definitive diagnosis. Moreover, replacing a throttle pedal position sensor on a GM application often also requires that a prescribed “relearn” procedure be performed, which procedure is best performed with dealer-grade equipment.

NOTE #2: Given the difficulty of diagnosing this code on GM applications, the easiest option is often to just replace the pedal position sensor with an OEM part, or at least, an OEM-equivalent part. In nine out of every instances of this code, replacing the complete pedal assembly will resolve the issue definitively.

I have been getting this code any idea what I can do?

YMM? This is a manufacturer-specific DTC, so it depends on the maker before we can figure out which direction to go.