OBD II fault code P1320 is a manufacturer specific code that is defined by carmaker Nissan as “Ignition Signal Primary – circuit malfunction”, and is set when the PCM (Powertrain Control Module) detects a failure or malfunction in one or more primary ignition circuits.

NOTE: While this code might be interpreted as meaning that one or more cylinders are misfiring on account of the fault in the primary ignition circuits, it is possible for this code to be present in an active state (stored as an active DTC), without there being misfires present on the engine.

When the ignition key on a modern vehicle is turned to the “START” position, many things have to happen at the same time, (or happen in consequence of something else happening) before the engine will actually start. However, as far as code P1320 is concerned on Nissan applications, we need only consider the process of delivering a spark to each cylinder, which happens in the following manner on a fully functional ignition system-

As soon as the engine starts to rotate during cranking, the Crankshaft Position Sensor generates a signal, which the PCM compares to signals generated by the Camshaft Position Sensors. If these signals correlate, no codes are set and the process continues. The PCM then sends the initial signal from the Crankshaft Position Sensor to a power transistor in the ignition coil of the cylinder that is approaching the top of its compression stroke via a circuit known as the “Primary Circuit”, which is low-voltage circuit to which code P1320 relates. This circuit is amplified by the power transistor to induce the high-voltage circuit known as the “Secondary Circuit”, which represents the current that produces the ignition spark when it jumps across the gap between the spark plug electrodes.

However, the primary circuit does not have to fail completely for this code to set. Factors like abnormal electrical resistances in wiring, crankshaft position sensor, ignition coil power transistors, or even the ignition coil itself can cause code P1320 to set, or contribute to its setting, which will cause a warning light to be illuminated.

Where is the P1320 sensor located? 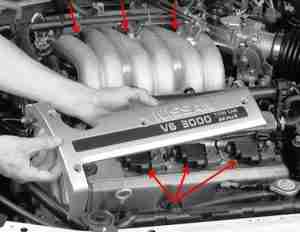 What are the common causes of code P1320?

While code P1320 can (and does) affect almost all Nissan applications, 4th and 5th generation Maxima models are affected far more frequently than any other Nissan application. On these applications, the cause of code P1320 can be directly attributed to poor quality OEM ignition coils, which MUST be replaced with a complete set of upgraded OEM ignition coils to avoid a recurrence of the problem and its associated drivability issues.

Nonetheless, there are several other possible causes of this code across all Nissan models, which could include the following-

NOTE: It is very common for code P1320 to be accompanied by codes P0335, P0340, P1335, and/or P1336. If these codes are present, they must be resolved first, and in the above order to avoid a misdiagnosis and the unnecessary replacement of parts and components.