Special note on trouble code P0420 and Mitsubishi vehicles: While DTC P0420 is a generic code that affects all OBD II compliant vehicles, the most common causes of this code sometimes vary between most vehicle makes. This article will therefore deal with code P0420 as it applies specifically to Mitsubishi vehicles.

OBD II fault code P0420 is a generic trouble code that is defined as “Catalytic converter system, bank 1 – efficiency below threshold” and is set when the PCM (Powertrain Control Module) detects a condition in which the efficiency of the catalytic converter that serves Bank 1 has fallen below a minimum allowable threshold. Note that “Bank 1” refers to the bank of cylinders on V-type engines that contains cylinder #1.

When diagnosing catalytic converter issues on any vehicle, it helps to understand what the term “catalytic converter” means. Put simply, it means that harmful constituents such as oxides of nitrogen, carbon monoxide, and several others are converted into innocuous substances like carbon dioxide and water vapor through contact with catalysts. In most modern catalytic converter designs, the catalysts are precious metals like platinum, iridium, rhodium, and others that react chemically with some exhaust gas constituents to convert these substances into other substances.

In terms of operation, a catalytic converter contains a porous core, or substrate that is coated with thin layers of catalytic metals. When exhaust gas flows through the pores in the core, the exhaust gas is exposed to the catalytic metals and provided the temperature of the core material has reached a temperature of around 1 400oF, the conversion of harmful substances starts and continues at the molecular level. Note that most modern catalytic converter designs include a dedicated electronically controlled heater element to reduce the core’s warm-up time to less than 20% of the time it takes to heat the core through contact with hot exhaust gas.

It is perhaps worth noting that catalysts in this or any other chemical reaction are not consumed in chemical conversion processes. Therefore, when an automotive catalytic converter’s efficiency decreases, it is not because the catalytic material has been consumed. Decreased efficiency results from factors and issues that either prevent the exhaust gas from flowing through the core, or more commonly, when contaminants like unburned fuel and oil vapors coat the catalysts, or as a result, begin to overwhelm the catalysts’ ability to convert some gaseous components in the exhaust stream to less harmful substances.

While modern catalytic converters can remove more than 95% oxides of nitrogen and similar percentages of carbon monoxide from the exhaust gas, the efficiency of catalytic converters cannot be monitored directly by a PCM. Therefore, all exhaust after-treatment systems use oxygen sensors, one upstream of the converter, and one downstream of the converter to make it possible for the PCM to infer a catalytic converter efficiency value. In practice, the upstream sensor measures the amount of oxygen in the exhaust stream, and based on this information, which switches rapidly between rich and lean, the PCM continuously adjusts the ratio of air to fuel in the air/ fuel mixture.

As a rule of thumb, PCM’s on all vehicles are programmed to set trouble codes when the catalytic converter’s efficiency drops below about 85%, although in some cases, the minimum efficiency threshold can be as high as 90%, which brings us to-

As with many other generic trouble codes, there is no single cause or set of circumstances that will cause code P0420 to set more frequently on Mitsubishi vehicles than on any other brand of vehicles.

When diagnosing this code, it helps to bear in mind the fact that while the technical implementation of some emission control strategies via effective control of the air/fuel metering systems through OBD II protocols sometimes differ between manufacturers, all OBD II systems are emission control systems first and foremost, as opposed to being diagnostic systems.

Where is the P0420 sensor located? 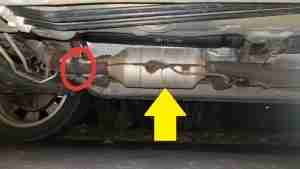 This image shows the location (arrowed) of the catalytic converter on a 2012 Mitsubishi Outlander, but note the red circle, which indicates a crack in the exhaust tube upstream of the converter.  This is a relatively common issue on some Outlander models, which can cause several different oxygen sensor related trouble codes to set.

On older Mitsubishi vehicles, the catalytic converter will be located in the exhaust system close to the engine to make maximum use of the hot exhaust gas to bring the converter up to operating temperature in the shortest possible time.

What are the common causes of code P0420?

SPECIAL NOTES: When diagnosing this code on Mitsubishi vehicles it is important to verify that no oxygen sensor and/or EGR (Exhaust Gas Recirculation) related codes are present since some oxygen sensor and EGR codes can either cause code P0420 to set, or contribute to its setting. Failure to verify that the oxygen sensors and EGR system is fully functional could result in a misdiagnosis, and quite possibly, the unnecessary replacement of a hugely expensive catalytic converter. END OF SPECIAL NOTES.

The most common symptoms of code P0420 on Mitsubishi vehicles are much the same across all Mitsubishi vehicles, and could include one or more of the following, but note that in some cases, there may be no symptoms present apart from a stored trouble code and illuminated warning light-