Special note on trouble code P0340 and Mitsubishi vehicles: While DTC P0340 is a generic code that affects all OBD II compliant vehicles, the most common causes of this code sometimes vary between most vehicle makes. This article will therefore deal with code P0340 as it applies specifically to Mitsubishi vehicles.

For instance, unlike the ignition systems of most other vehicle brands, the PCM on Mitsubishi applications does not require input data from both the crankshaft and camshaft position sensors before the engine can be started. In the case of Mitsubishi systems, the PCM only requires input data from the camshaft position sensor, which is used to detect the TDC (Top Dead Center) position of piston #1.

This information is used to calculate appropriate ignition and fuel injection timing strategies. Thus, while the engine is cranking, the PCM “tracks” the position of piston #1 via the position of the intake camshaft. While this system works well, its continued operation requires that all engine timing components are aligned correctly and in good condition, since the crankshaft’s position is not correlated directly to that of the camshaft via the crankshaft position sensor as is the case on most other applications.

We need not delve into the technical details of each type of camshaft position sensor in use on Mitsubishi vehicles here, beyond saying that Mitsubishi vehicles are typically fitted with Hall-effect sensors. These sensors create electrical signals when a rotating reluctor ring or protrusion on the camshaft passes in front of the sensing element. In terms of operation, the camshaft position sensor is supplied with a 5-volt reference voltage that switches between “ON” and “OFF” states as the camshaft rotates.

By monitoring the state of the signal, the PCM can correlate the crankshaft’s position with that of the camshaft as a means to verify that the engine’s valve, ignition, and injection timing are all within a specified range before starting the engine. Therefore, if the PCM does not receive a plausible signal (or any input signal) from the camshaft position sensor for four consecutive seconds during cranking, the PCM will recognize that it cannot control the fuel delivery and ignition systems effectively, and it will set code P0304 and illuminate a warning light as a result, which brings us to-

Camshaft position sensor failures caused by heat and vibration are by far the most common cause of code P0340 on many, if not most Mitsubishi vehicles. Note that this true even for OEM sensors; see the section on Common Causes for more details on other possible causes of this code on Mitsubishi applications. 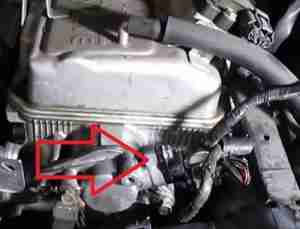 Therefore, it is recommended that you consult reliable service information for the affected application to locate and identify the relevant sensor correctly. Failing to locate the correct sensor could cause misdiagnoses and possibly the unnecessary replacement of parts and components.

Apart from camshaft position sensor failures caused by heat and vibration, other causes of code P0340 on Mitsubishi vehicles could include one or more of the following-