Special note on trouble code P0171 and Mitsubishi vehicles: While DTC P0171 is a generic code that affects all OBD II compliant vehicles, the most common causes of this code sometimes vary between most vehicle makes. This article will therefore deal with code P0171 as it applies specifically to Mitsubishi vehicles.

OBD II fault code P is a generic trouble code that is defined as “System too lean – Bank 1” and is set when the PCM (Powertrain Control Module) detects an air/fuel mixture that is too lean on bank 1. Note that in the context of this code, “system” refers to faults in the air/fuel metering system that cause, or contribute to an imbalance in the ideal ratio between air and fuel in the air/fuel mixture, while “Bank 1” refers to the bank of cylinders on V-type engines that contains cylinder #1. Note also that this code is often accompanied by code P0174 – “System too lean – Bank 2” on V-type engines.

During normal engine operation under closed-loop operation, the PCM uses information about the exhaust gas composition obtained from the upstream oxygen sensor(s) to regulate and maintain the air/fuel mixture at a ratio of 14.7 parts of air to one part of fuel. During this process, the oxygen sensor(s) compares the concentration of oxygen in the exhaust stream with a sample of oxygen in ambient (atmospheric) air and then converts this comparison into an electrical signal that the PCM interprets as the level of oxygen in the exhaust stream.

During steady cruising conditions, the level of oxygen in the exhaust stream typically remains relatively constant, since the demand for fuel does not change much. However, during driving conditions that involve many throttle inputs, the engines’ demand for fuel changes with every throttle input, and since the level of oxygen in the exhaust gas is a direct function of the combustion process, the PCM needs to “know” how this level changes to regulate the air/fuel mixture effectively under all operating conditions.

Thus, as a practical matter, the PCM switches the signal from the upstream oxygen sensors to alternately read rich (too little air in the mixture) to reading lean (too much air in the air/fuel mixture) multiple times per second to average out the measured oxygen values in the exhaust gas. This has the practical advantage that the PCM does not have to make large adaptations to the fuel trims*, which if it did, would produce large amounts of exhaust emissions since the engine would necessarily run rich for longer periods under some driving conditions. By making small adaptations more often, the ideal air/ fuel ratio is maintained more easily, which improves combustion, and reduces fuel consumption and exhaust emissions, at the same time.

* Fuel trims are the adaptations the PCM makes to the injectors’ pulse widths, to increase or reduce the volume of fuel injected into the engine. These changes are based entirely on input data obtained from the upstream oxygen sensors when the fuel delivery system is operating in closed-loop operation.

Thus, if a fault, defect, or malfunction occurs that prevents the PCM from adequately compensating for a lean running condition, it will recognize that it cannot control or regulate the air/fuel mixture effectively, and it will set code P0171 and illuminate warning light as a result, which brings us to-

Most Mitsubishi vehicles employ an “adaptive fueling logic”, which means that the system is programmed to compensate automatically for both wear and tear in moving parts, and loss of sensitivity in all implicated sensors. As a result, the PCM will factor such biases or shifts into the input data generated by the upstream oxygen sensors, and such adaptations will typically not set trouble codes. However, the PCM’s ability to make such adaptations are limited, and therefore, it is programmed to look for specific operating parameters that must be within acceptable ranges to either enable the setting of fault codes or to prevent the setting of false-positive trouble codes.

In short, these parameters include the following under open-loop operating conditions-

Thus, if a fault, defect, or malfunction occurs that prevents the PCM from adequately compensating for a lean running condition, it will recognize that it cannot control or regulate the air/fuel mixture effectively, and it will set code P0171, and illuminate a warning light as a result. 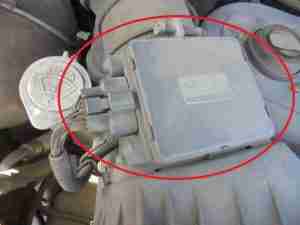 The most common causes of code P0171 on Mitsubishi applications are listed below in the order of prevalence, with the most prevalent causes listed at the top of the list-

NOTE: While failed, failing, defective, or contaminated upstream oxygen sensors can sometimes cause code P0171 to set on Mitsubishi applications, this is neither a typical nor a common cause.

NOTE: In a large percentage of cases, no driveability or other symptoms may be present apart from an illuminated warning light and stored trouble code.