OBD II fault code P1259 is a manufacturer specific code that is defined by carmaker Honda as “VTEC System Circuit Fault (Bank 1)”, and is set on these applications when the PCM (Powertrain Control Module) detects a defect, malfunction, or failure in the electrical control/monitoring system of the VTEC mechanism on Bank 1. Note that “Bank 1” refers to the bank of cylinders that contains cylinder #1 on V-type engines.

“VTECH” stands for Variable Valve Timing & Lift Electronic Control, and is the name given to the proprietary system Honda uses to alter the lift and duration of the engine valves on VTEC equipped engines.

The VTEC system uses two (or sometimes three) camshaft lobe profiles that can be selected hydraulically to increase the volumetric efficiency of the engine. As a practical matter though, VTEC should not be confused with Variable Valve Timing systems that rotate camshafts relative to a reference point in order to either advance or retard the valve timing.

In terms of operation, the VTEC system most commonly uses two camshaft lobe profiles per set of valves. One profile is designed to improve power and fuel economy at low engine speeds, while the other profile is designed to increase airflow, and hence engine power at engine speeds above about 4000 RPM. In practice, the three corresponding valve lifters (aka, rocker arms) can move independently of each other; at low engine speeds, two valve lifters operate the valves, while the third rocker arm is merely follows the cam lobe, but cannot activate the valves.

When conditions allow, typically at high engine speeds above about 4000 RPM, the PCM opens an oil control solenoid that allows pressurized engine oil to act on a sliding locking pin that locks the three valve lifters together. This allows the (middle) high-lift cam lobe to transfer its motion to the two adjoining valve lifters via the locking pin, thereby increasing both the lift and duration of the valves. When the engine speed drops below about 4000 RPM, the PCM removes oil pressure from the locking pin, which disengages the center valve lifter from the adjoining lifters, and the engine reverts to using the low-lift lifters.

In practice, the PCM uses input data from the engine speed sensor, throttle position sensor, dedicated VTEC oil pressure switch, and several other sensors to determine the switching point between high and low lift valve operation, meaning that the switching process does not require any inputs from the driver, and is therefore relatively seamless.

It should be noted though while that code P1259 specifically refers to a problem in the VTEC systems’ control/signal/monitoring circuit, some mechanical failure modes can contribute to this code being set and stored.

Where is the P1259 sensor located? 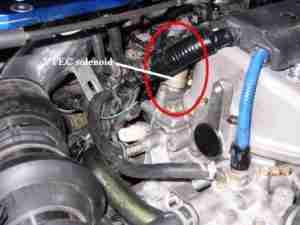 What are the common causes of code P1259?

As stated elsewhere, code P1259 refers to an electrical issue in the VTEC control system, and all diagnostic procedures for this code should start with a thorough visual inspection of all associated wiring and connectors. Nonetheless, some other common causes of code P1259 could include the following-