SPECIAL NOTES: Although generic OBD II trouble codes such as P0300 – “Random/Multiple Cylinder(s) – Misfire Detected” can, and do affect all OBD II compliant vehicles, some vehicle makes and models are sometimes more susceptible to some generic trouble codes than most other vehicle makes and models under real-world driving and operating conditions. Therefore, this article will discuss the generic trouble code P0300 as it applies to the GMC models that are most commonly affected by it. END OF SPECIAL NOTES.

OBD II fault code P0300 is a generic trouble code that is defined as, “P0300 – Random/Multiple Cylinder(s) – Misfire Detected”, and is set when the PCM (Powertrain Control Module) detects persistent misfires on multiple cylinders that occur in a random pattern under some, or all engine speeds and/or loads.

When dealing with misfires on gasoline engines, and especially with misfires that occur randomly in multiple cylinders, it helps to remember that OBD II systems are not so much diagnostic systems, as they are emission control systems with some diagnostic abilities tacked on. In practice, this means that while modern OBD II systems can diagnose faults in all the electronically controlled systems that monitor and manage critical engine management functions such as fuel delivery and ignition spark timing, the primary function of OBD II systems is to minimize harmful exhaust emissions.

The above is saying a lot, but in their simplest form, all engine management systems work by comparing the inputs from sensors with pre-programmed values that represent a collective ideal condition, in which all sensor inputs match desired or expected values under all permissible operating conditions.

We need not delve into the complexities of how the actual comparisons are achieved here, beyond saying that all misfires have the potential to increase exhaust emissions. As a result, the presence of random misfires represents a deviation from an ideal condition since a) the cause of the condition cannot always be identified, and b) the overall engine management system cannot adapt any operating parameters to lower increased emissions to within an acceptable range.

However, the standards that define OBD II systems require all OBD II systems to incorporate a dedicated misfire detection system that can detect misfires since misfires increase exhaust emissions as a result of poor or incomplete combustion of the air/fuel mixture.

The technical implementation of modern misfire detection systems is a hugely complicated topic and, therefore, falls outside the scope of this article. Nonetheless, suffice to say that many of the finer details of how these systems work involve, among other things, the way the crankshaft in any given flexes and deforms when combustion occurs in the cylinders.

However, while misfire detection systems are generally robust and very accurate, random misfires on all, or multiple cylinders can sometimes overwhelm the misfire detection system’s ability to associate misfires that occur in rapid succession with particular cylinders. In such cases, the PCM will recognize that it cannot reduce the elevated exhaust emissions caused by the rapidly occurring misfires, and it will set code P0300 as a result.

See the section on “Causes” for more details on the most common cause of code P0300 on GMC products. 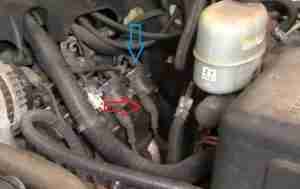 This image shows the location (arrowed) of one pair of ignition coils on the valve cover of one bank of cylinders on a 2002 GMC Sierra V8 engine. Note that since this location of ignition coils is almost universal on GMC vehicles, it may be necessary to remove or reroute heater, fuel, and vacuum hoses/lines on most GMC applications to gain full access to all the ignition coils.

The most common cause of code P0300 on GMC vehicles involves the deterioration and eventual breakdown of the insulation of the ignition coils. This condition does not only cause internal short circuits in the coils but also creates pathways for the coils’ discharge current to leak down to ground, thus preventing the high-intensity current from reaching the spark plugs. It is perhaps worth noting that it is common for all OEM ignition coils on a particular to fail at about the same time.

As a practical matter, both the construction and the location of ignition coils on GMC ignition coils combine to produce (almost) simultaneous ignition coil failures. In the first case, the insulation around the coils is too thin to provide long-term insulation, while in the second case the large temperature fluctuations caused by the coils’ location on the cylinder head(s) accelerate the degradation of the already insufficient insulation material.