OBD II fault code U2023 is a manufacturer specific code that is defined by car maker Ford as “Fault Received From External Node”, and is set when the PCM (Powertrain Control Module) detects an input from any other control module on the vehicle that falls outside of an expected range, value, or voltage.

NOTE: Note that in this definition, the word “External” refers to control modules (and their associated sensors and circuits) that are external to the PCM, and therefore, this code does not refer to faults, failures, malfunctions, or defects within the PCM itself. Note also that “Node” refers to a control module, all of which are regarded as nodes, or fixtures in the overall topology of a serial bus communications system.

Modern vehicles are highly complex and to operate efficiently, all of the many monitoring, control, and management systems on a modern vehicle are required to work in perfect unison with each other. Achieving this unity depends on thousands of messages and bits of information being transmitted (and received) between several dozen microprocessors over a vast communications network that consists of many hundreds, and sometimes, thousands of circuits and even more connections and splice joints, all of which are protected against overloads by fuses, fusible links, and other current-stabilizing devices.

In practice, this network of wiring is known as the CAN (Controller Area Network) serial bus communications system. However, while all CAN bus systems (and the several variants in use today) all follow the same general design pattern and/or layout, each individual vehicle manufacturer adapts a particular installation to suit the trim and equipment level of a particular vehicle model. Moreover, different variants of CAN bus systems employ different (sometimes, proprietary) communications protocols, which means that in terms of diagnostics, most generic code readers and scanners cannot access the CAN systems of most vehicles.

Nonetheless, when a vehicle is in operation, most of the input data generated by most sensors and monitoring devices is shared among most microprocessors that use the data in different ways, and for different purposes. Moreover, the types of data that is transmitted are divided into different priority classes, with the data that has the highest priority enjoying the highest priority in terms of when it is transmitted. This type of information would typically include data from wheel speed sensors, engine and fuel management data, and other including ABS, SRS (Supplementary Restraint System), traction control, and in some cases, stability control as well.

Limited space precludes a more detailed treatment of this topic, but suffice to say that the PCM acts as a sort of clearing house for the vast majority of information that is sent and received over the CAN bus system. As such, the PCM is programmed to recognize when an input from any implicated microprocessor falls outside of an expected, acceptable, or allowable range, voltage, or limit. The ability is based either on look-up tables against which input data is compared, or on dedicated circuits acting as calculators that calculate desired actuator positions using complex algorithms. Two examples of the latter would be EGR (Exhaust Gas Recirculation) and boost pressure control valves.

As stated elsewhere, any control module on a Ford application that either sends inaccurate data, or receives inaccurate data from another control module has the ability or potential to set code U2023. It should be noted however that in most such cases, the area, or section within the CAN bus system in which the actual fault had occurred would be indicated by one or more additional codes. However, there are exceptions to this rule, such as when an actual control module is failing, or has failed. In these cases though, there is a very high likelihood that the fault involves continuity in wiring, as opposed to the failure of a control module.

Regardless of the exact nature and/or root cause(s) of the failure, defect, or malfunction though, when the PCM receives defective input data from any control module, it will recognize that it cannot control, manage, or monitor one or more systems effectively, and it will set code U2023 and illuminate one or more warning lights as a result.

Where is the U2023 sensor located? 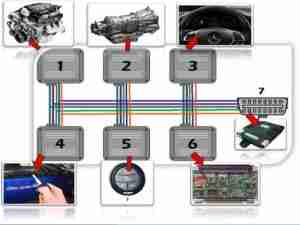 Since code U2023 has so many possible causes, it is impossible to provide details on the locations of each, or even most microprocessors or control modules that can conceivably cause this code. Therefore, the image above is a hugely simplified representation of a typical CAN bus system that shows an approximation of how some major components and systems are interconnected via the system. As such, this image is intended for illustrative purposes only, and it should therefore not be used in any diagnostic procedure related to any communications related trouble code.

What are the common causes of code U2023?

NOTE: Be aware that since the possible causes of code U2023 are many and extremely varied, it may be impossible to diagnose the actual root cause(s) of this code without the use of dealer specific diagnostic equipment and software. If such equipment and/or software is not available, the better option would be to refer the affected vehicle to the dealer or other competent repair facility for professional diagnosis and repair.

WARNING: Note that attempts to diagnose and/or repair code U2023 on a DIY basis could cause extensive and often irreparable damage to the vehicle’s electrical system.

Nonetheless, some common causes of code U2023 could include the following-

BAT Team Discussions for U2023