OBD II fault code P138B is a manufacturer specific code that is defined by carmaker Ford as “Glow Plug Control Module- System Voltage”, and is set when the PCM (Powertrain Control Module) detects an abnormally high or low voltage feeding into the glow plug control module.

Since the combustion of diesel fuel is very difficult to initiate in cold engines, all diesel engines are fitted with glow plugs to provide an initial source of heat to assist in the ignition of the diesel fuel/air mixture in low ambient temperatures, or when the engine is cold- typically after not having run for a period of several hours.

In practice, glow plugs screw into the cylinder head much like spark plugs on gasoline engines, and consist of a steel tube containing a heating element that is embedded in a ceramic-based material to improve convection. On older systems, the glow plugs were supplied with current from the battery via a relay and timing device when the ignition was turned on.

Improved control of the glow plugs is made possible by the fact that modern glow plug control modules have the ability to sense the electrical resistance of each individual glow plug’s heating element, which is important, since no two glow plugs on any diesel engine are identical in all respects. While modern mass production methods have high repeatability rates, it is impossible to eliminate all differences in all glow plugs that could potentially affect the operation of a given glow plug relative to other, seemingly identical glow plugs.

Nonetheless, by being able to sense or measure the electrical resistance of each glow plug, a glow plug control module can modulate the current that is fed to each individual glow plug via a dedicated plug lead. The practical advantage of this is that all the glow plugs are heated to the same temperature in the same amount of time, which has the benefits of reducing engine-starting times, while reducing harmful exhaust emissions, at the same time.

Conversely, if the engine coolant temperature is at, or above a specified threshold, the PCM will disable the glow plug control module, since the residual heat in the cylinders is sufficient to ignite the air/fuel mixture. Note though that in extremely low ambient temperatures, the glow plug control module may continue to feed current to the glow plugs for several seconds after the engine has started both to improve combustion, and to reduce exhaust emissions.

Where is the P138B sensor located? 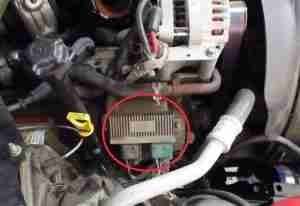 Note the location of the electrical connectors; loose, damaged, corroded, or broken terminals in these connectors are the most common cause(s) of this code on almost all Ford applications.

What are the common causes of code P138B?

What are the symptoms of code P138B?

The symptoms of code P138B are much the same across all Ford applications, and could include the following-

None found. Ask a question about P138b.