OBD II fault code P0455 is a generic code that is defined as “EVAP System Leak (No Purge Flow or Large Leak) Conditions”, and is set when the PCM (Powertrain Control Module) detects a large leak in the EVAP (Evaporative Emissions Control) system.

When the EVAP system is not in purge mode, both the vent and purge valves are closed, which has the effect of sealing the fuel system off from the atmosphere. As the fuel generates vapors, the vapors are absorbed by the activated charcoal in the charcoal canister until the vapor pressure approaches a predefined limit. When this happens in a fully functional system, the ECU opens both the purge valve and the vent valve to allow engine vacuum to draw the accumulated vapors into the engine. Note that the purpose of opening the vent valve is to allow atmospheric pressure to assist in “pushing” the collected vapors from the charcoal canister.

Another strategy involves using a dedicated air pump to pressurize the system (while keeping all valves closed) to a predefined maximum pressure. Based on how fast the pressure drops after the pump is deactivated, the PCM can also calculate the size of the leak. Another strategy involves the Ideal Gas Law, which states that the temperature of a given volume of gas (fuel vapor, in this case) will decrease by a predictable amount when the pressure of the vapor decreases. Based on the change in the vapor’s temperature, the PCM can calculate the size of the leak.

As stated elsewhere, code P0455 can also indicate a condition in which no fuel vapors flow through the system.  In these cases on Ford applications, the most common cause is a defective charcoal canister vent valve that is stuck in the closed position, thus preventing engine vacuum from evacuating the EVAP system. Note though that this condition will almost certainly be indicated by one or more codes that relate directly to the vent valve and/or its control circuit(s).

While the presence of a leak in the EVAP system will generally not affect drivability, a leak will cause code P0455 to be stored and a warning light to be illuminated. Be aware though that if the code indicates a “no EVAP flow” condition (depending on the nature of the problem),  the fuel vapor pressure may build-up to the point where hoses and lines may rupture, which may cause large quantities of fuel to leak from the tank. Note that with either condition, the application may also not pass a compulsory emissions test, because the EVAP monitor will not run or complete.

So why does code P0455 affect Ford applications more than others?

While Ford has made some attempt to protect these components from the elements by enclosing them in plastic covers, these covers are not capable of keeping out water that is splashed onto it when the rear wheels pass through water. Thus, the more water the wheels throw up, the more water enters the protective shield, with the inevitable result that corrosion starts to form on electrical connectors, as well as inside the vent valve’s control solenoid. 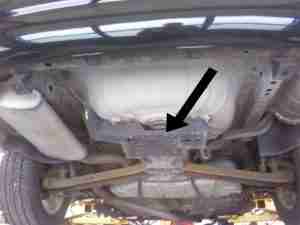 The image above shows the location (arrowed) of the charcoal canister and vent valve on a Ford Focus application. Note the location between the rear wheels, as well as the fact that the plastic cover is not waterproof. If it were waterproof, many instances of code P0455 on Ford applications could have been prevented.

Apart from the most common causes of code P0455 on Ford applications described above, some other potential causes could include the following-