Special note on trouble code P0340 and Ford vehicles: While DTC P0340 is a generic code that affects all OBD II compliant vehicles, the most common causes of this code sometimes vary between most vehicle makes. This article will therefore deal with code P0340 as it applies specifically to Ford vehicles.

However, for a Ford engine to start, it needs input data from the camshaft position sensor to determine the position of piston #1 relative to the position of the engine valves in cylinder #1.

What the PCM is looking for before engine start-up is verification that piston #1 is near the top of its compression stroke and that the intake valve(s) on cylinder #1 is about to close. In practice, the PCM uses this information to calculate the appropriate moment to a) deliver the ignition spark and b), to open injector #1 to inject fuel into cylinder #1. Therefore, to do this correctly and consistently, the positions of the crankshaft and camshaft must correlate exactly to a) ensure peak engine performance, and b) to reduce exhaust emissions by ensuring proper combustion of the air/fuel mixture.

We need not delve into the technical details of each type of camshaft position sensor in current use here, beyond saying that some Ford vehicles are fitted  with Hall-effect sensors, while others are fitted with magnetic-type sensors. While the operating [principles of the two types of sensors are different, both types of sensors generate electrical signals when a rotating reluctor ring or protrusion on the camshaft passes in front of the sensing element, which signals the PCM counts and interprets as the position of the camshaft relative to the position of piston #1.

Thus, by monitoring the state of the signal, the PCM can correlate the crankshaft’s position with that of the camshaft as a means to verify that the engine’s valve, ignition, and injection timing are all within a specified range before starting the engine. Therefore, if the position of the intake camshaft does not correlate with any other timing aspect because the PCM does not receive an input from the camshaft position sensor, or the PCM receives an implausible signal from the sensor, the PCM will recognize that it cannot control the fuel delivery and ignition systems effectively.

When this happens, the PCM on most Ford applications will set code P0340 within a predetermined, and strictly enforced time limit, or within 1.5 seconds after the engine has started, which brings us to-

As with many other generic trouble codes, there is neither a single cause of code P0340, nor a unique set of circumstances that will cause this code to set more often on Ford vehicles than on any other brand of vehicle.

However, there is one clear exception to this general rule, and it involves the use of most brands of aftermarket camshaft position sensors. In some cases, some aftermarket sensors might deliver satisfactory performance for a limited time, but for the most part, only OEM replacement sensors will deliver reliable and consistent performance over the long term.

Thus, when a defective camshaft position sensor is suspected, the wisest course of action would be to replace it with an OEM part. See the section on Common Causes for more details on other possible causes of code P0340 on Ford vehicles. 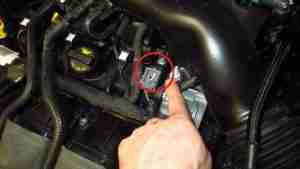 Note also that while the sensor is reasonably accessible in this example, it may be necessary to remove and/or disassemble unrelated components on some other Ford vehicles to gain easy access to the sensor. Therefore, if the sensor is not easily accessible, the better option would be to seek professional assistance with diagnosing and replacing the sensor.

The most common causes of code P0340 on Ford vehicles are largely similar across all Ford applications, and could include one or more of the following, but note that possible causes are listed here in their order of prevalence, with the most prevalent causes listed first-

Common symptoms of code P0340 on Ford vehicles are largely similar across all Ford vehicles and could include one or more of the following. Note, however, that depending on the vehicle and the nature of the problem, the severity of one or more symptoms listed here can vary substantially between applications-