Special note on trouble code P0301 and Chrysler vehicles: While DTC P0301 is a generic code that affects all OBD II compliant vehicles, the most common causes of this code sometimes vary between most vehicle makes. This article will therefore deal with code P0301 as it applies specifically to Chrysler vehicles.

OBD II fault code P0301 is a generic trouble code that is defined as “Cylinder 1 – misfire detected” and is set when the PCM (Powertrain Control Module) detects a misfire on cylinder #1 via the built-in misfire detection system.

It should be noted though that all modern crankshafts flex and deform under normal operating conditions. Under some operating conditions, these deformations can cause cyclical variations in a crankshaft’s rotational speed. Therefore, to prevent normal torsional effects from being recorded as misfires, these deformations are typically absorbed or damped out by a harmonic balancer mounted on the front end of the crankshaft.

Thus, to prevent false-positive misfire detections, all misfire detection systems are calibrated to record variations in the crankshaft’s speed that exceed either a specified percentage of the crankshafts’ current speed, or, when a specified number of speed variations occur within a specified number of engine revolutions. These parameters vary between both manufacturers and engine designs of the same vehicle brand, but regardless of the calibration system in use on any given Chrysler engine, the primary purpose of misfire detection systems on all engines is to detect misfires to prevent increased exhaust emissions on the one hand and to protect the engine and some exhaust components against possible damage, on the other.

It should be noted, though, that misfire trouble codes come in two “flavors”. The first is codes that identify a particular misfiring cylinder, such as code P0301, which identifies a misfire on cylinder #1. The other flavor is non-specific codes, such as P0300 – “Random/multiple cylinders – “Misfire detected”, which indicates a misfire that the PCM cannot relate to one or more specific cylinders or causes.

Moreover, with a few exceptions, the most likely causes of code P0301 on Chrysler applications involve failures, defects, and malfunctions in systems and/or components that are not monitored directly by the PCM or any other control module(s), as is the case with all other vehicle brands. See the section on “Common causes” for more details.

Where is the P0301 sensor located? 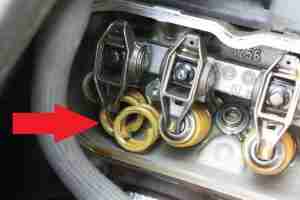 This image shows a fragmented valve spring on a Chrysler engine, which is the type of mechanical failure that will typically set a single cylinder-specific trouble code. Valve springs can break for a variety of reasons, some of which include incorrect installation, the use of poor quality aftermarket springs, or as the result of failed valve lifters or rocker arms.