Special note on trouble code P0300 and Chrysler vehicles: While DTC P0300 is a generic code that affects all OBD II compliant vehicles, the most common causes of this code sometimes vary between most vehicle makes. This article will therefore deal with code P0300 as it applies specifically to Chrysler vehicles.

OBD II fault code P0300 is a generic trouble code that is defined as “Random/multiple cylinders – misfire detected” and is set when the PCM (Powertrain Control Module) detects misfires on random or multiple cylinders. Note that while the PCM has detected random misfires, it can identify neither the root cause(s) of the misfire(s) nor the cylinders that are misfiring via the built-in misfire detection system. Therefore, the PCM will set this non-specific misfire code.

In practice, most advanced misfire detection systems can detect variations in the crankshafts’ speed as small as 2 percent, even at high engine speeds. While the duration of such fluctuations is typically measured in microseconds, the misfire detection uses both the fluctuation and the pattern in which they repeat to confirm the misfire.

Moreover, since the input data is derived from the crankshaft position sensor and its associated reluctor ring that is indexed or referenced to cylinder #1, the misfire detection system can usually identify misfiring cylinder(s). The system does this based on the pattern of crankshaft speed variations, coupled with input data on whether or not an ignition spark had been delivered (to misfiring cylinders) and whether or not one or more fuel injectors had been disabled because ignition sparks had not been delivered.

In the real world, however, all misfires have at least some potential to increase exhaust emissions, regardless of their cause(s). However, since OBD II systems can’t monitor some parameters directly, such as the mechanical condition of the engine, the operation of the valve train on applications that are not fitted with variable valve timing, or loss of cylinder compression, OBD II systems are enabled to detect misfires they cannot relate to any specific causes.

Thus, while the PCM’s misfire detection system may detect misfires under such conditions, it can identify neither the cause nor the misfiring cylinder(s) because parameters that are monitored (ignition spark and fuel delivery) may be working within acceptable parameters.

Therefore, since even unidentified misfires have the potential to affect emissions negatively, the PCM will set code P0300 and illuminate a warning light when it detects misfires it cannot identify or relate to one or more specific cylinders.

When diagnosing non-specific misfire codes on any vehicle, it helps to remember that as far as misfire detection systems are concerned, the distinction between specific and non-specific causes are not always clear cut. This is aggravated by the fact that closely related codes known as “cylinder power contribution” codes may also be present. In some applications, cylinder power contribution trouble codes can be seen as “precursors” to fully-fledged misfire codes, because the effects of these codes are typically not as pronounced as the effects of proper misfire codes are.

Nonetheless, while some monitored parameters, such as ignition spark and fuel delivery failures can cause the non-specific, P0300 code to set, this is rare. In by far, the vast majority of instances of code P0300 on Chrysler applications, the common causes of specific misfire codes will set codes that relate to specific systems and/or components. Typical examples of this include codes relating to ignition coil failures, abnormal fuel pressure, low oil pressure that affects the operation of variable valve/camshaft timing systems/components, and others, such as faults and defects in EGR (Exhaust Gas Recirculation) systems and/or components.

However, some aspects of monitored systems are not monitored directly: see the section on Common Causes for more details. 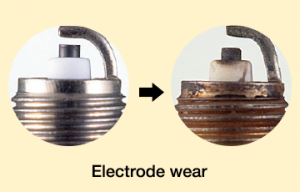 This image shows the appearance of a new sparkplug on the left and a severely worn sparkplug on the right. Electrode wear on sparkplugs is a normal consequence of sparkplug operation, which is why it is critically important to replace sparkplugs strictly according to the vehicles’ prescribed maintenance/service schedule.

Note that while it is rare for code P0300 to be accompanied by other, specific misfire codes, it does happen, but in cases where P0300 appears in isolation, the most common causes are listed below in their order of prevalence, with the most prevalent causes listed at the top of the list-

NOTE: Low cylinder compression on one or more (or all) cylinders will typically produce specific misfire codes that relate directly to the affected cylinder(s).