OBD II fault code P1345 is a code used by General Motors – but more specifically by Chevrolet – that is defined as “Crankshaft Position (CKP)-Camshaft Position (CMP) Correlation”, and is set when the PCM (Powertrain Control Module) on Chevrolet models detects a mismatch (correlation fault) in the input data from the Crankshaft -, and Camshaft Position sensors that exceeds a maximum allowable limit.

NOTE: Note that although code P1345 with the definition “Crankshaft Position (CKP)-Camshaft Position (CMP) Correlation”, is also used by closely related GM products, including Buick, Cadillac, Isuzu, Pontiac, and Saturn, this guide primarily deals with code P1345 as it relates to Chevrolet models.

In simple terms, the PCM counts the number of “ON/OFF” signals, and uses this value to calculate the engine speed, which in turn, is used to make adjustments to the ignition timing. Moreover, the reluctor ring has a spot in which one tooth is “missing”, which creates one signal in every engine revolution that is twice as long as all other signals. This gap in the reluctor ring is a reference point relative to piston #1, which the PCM uses to regulate the ignition timing based on engine speed.

Regardless of design specifics though, the positions of the crank -, and camshafts have to be in agreement relative to piston #1 if the ignition spark and fuel are both to be delivered at the optimal moment. Since the fuel injection timing is determined by the position of the camshaft(s), fuel might be injected either too late or too early relative to both the position of piston #1, and the opening/closing moments of the valves, even if the crankshaft position sensor is indicating the position of piston #1 correctly.  If this occurs, the results can vary from excessive fuel consumption, to excessive smoking from the tail pipe, to loss of power, serious misfires that can result in catalytic converter failure, and in serious cases, to dilution of the engine oil that can cause engine failure.

Thus, to avoid these issues and to simplify the process of engine/fuel management, the PCM is programmed to recognize when the input signals from the crank -, and camshaft position sensors no longer correlate exactly. However, to allow for some variation that occurs as the result of mechanical wear on some components such as timing chains, sprockets, and VVT (Variable Valve Timing) actuators, the PCM will generally not set code P1345 until the correlation failure exceeds about 1.5% to a maximum of 2% of the rotation of the crankshaft.

Where is the P1345 sensor located? 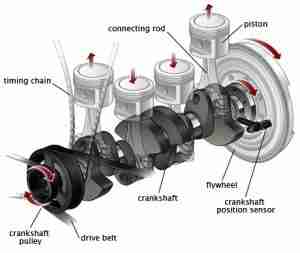 The image above shows the location of the crankshaft position sensor (near the flywheel) on a Chevrolet Cobalt engine. Note however that since the location of this, and camshaft position sensors vary greatly between Chevrolet applications, it is critically important to refer to the manual for the affected application to locate and identify these sensors correctly. Failure to identify sensors correctly can lead to confusion, wasted time, misdiagnoses, and the unnecessary replacement of parts and components.

What are the common causes of code P1345?

Nonetheless, some common causes of code P1345 could include the following-

NOTE 1: Note that if code P1345 is present on GM applications with VVT (Variable Valve Timing) and/or VCT (Variable Camshaft Timing), defects in these systems can cause P1345 to set. However, since defects in these systems will almost certainly be indicated by dedicated codes other than P1345, all additional codes must be resolved in the order in which they were stored if a misdiagnosis is to be avoided.