OBD II fault code P0455 is a generic code that is defined as “Evaporative Emission System Leak Detected (large leak), and is most commonly set when the PCM (Powertrain Control Module) detects a large leak in the evaporative emissions control system.

NOTE: Note that on many applications, this code has a dual definition, in the sense that it can either indicate a large leak (as opposed to a small leak) in the EVAP system, or a fault, failure, defect, or malfunction in the EVAP system that is preventing the flow of fuel vapors to the engine.

When the EVAP system is not in purge mode, both the vent and purge valves are closed, which has the effect of sealing the fuel system off from the atmosphere. As the fuel generates vapors, the vapors are absorbed by the activated charcoal in the charcoal canister until the vapor pressure approaches a predefined limit. When this happens in a fully functional system, the ECU opens both the purge valve and the vent valve to allow engine vacuum to draw the accumulated vapors into the engine. Note that the purpose of opening the vent valve is to allow ambient air under atmospheric pressure to assist in “pushing” the collected vapors from the charcoal canister.

Another strategy involves using a dedicated air pump to pressurize the system (while keeping all valves closed) to a predefined maximum pressure. Based on how fast the pressure drops after the pump is deactivated, the PCM can also calculate the size of the leak. Yet another strategy involves the Ideal Gas Law, which states that the temperature of a given volume of gas (fuel vapor, in this case) will decrease at a predictable rate when the pressure of the vapor decreases. Thus, based on the rate of change in the vapor’s temperature, the PCM can calculate the size of the leak.

While the presence of a leak in the EVAP system will generally not affect drivability, a leak will cause code P0455 to be stored and a warning light to be illuminated. Be aware though that if the code indicates a “no EVAP flow” condition (depending on the nature of the problem),  the fuel vapor pressure may build-up to the point where hoses and lines may rupture, which may cause large quantities of fuel to leak from the tank. Note that with either condition, the application may also not pass a compulsory emissions test, because the EVAP readiness monitor will not run or complete.

Why does code P0455 affect Chevrolet applications more than others?

Code P0455 is very common across all manufacturers, but in the case of Chevrolet, or GM products in general, two particular causes of this code predominate, to the point where many Chevrolet owners refer to this code as “the dreaded gas cap code”.

Failed, or defective gas caps that allow fuel vapor pressure to escape from the EVAP system is a common cause of this code on Chevrolet applications, and while an OEM cap usually costs less than about $50, replacement of the cap is not guaranteed to provide a reliable, long-term solution. Based on this writer’s personal experience, it appears that GM gas caps suffer from inherent design flaws that seriously affect the useful life of a new cap. Note that since a visual inspection of a suspect gas cap will almost never reveal the nature of the failure, a smoke test is recommended to either confirm, or eliminate a defective gas cap as the cause of code P0455 on Chevrolet applications.

The other major cause of code P0455 on Chevrolet applications is the fact that liquid fuel enters the charcoal canister when the fuel tank is filled past the recommended level, which is when the fuel pump “clicks off” for the first time. When liquid fuel enters the charcoal canister, the compacted charcoal disintegrates, and some particles can migrate throughout the EVAP systems’ vacuum and fuel vapor hoses/lines. Some charcoal particles may become stuck in either (or both) the EVAP vent and purge valves, which prevents these valve from closing thus allowing vapor pressure to escape into the atmosphere. 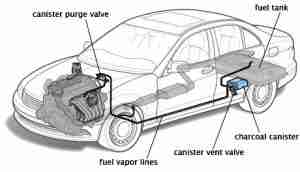 The image above shows the most common position of the EVAP charcoal canister on most Chevrolet applications. Note though that on Chevrolet trucks, the charcoal canister is typically located above the rear axle, where it is fixed to the frame with brackets.

As stated elsewhere, code P0455 can also indicate a condition in which no fuel vapors flow through the system. In these cases on Chevrolet applications, the most common cause is a defective EVAP purge valve/solenoid that is stuck in the closed position, thus preventing engine vacuum from evacuating the EVAP system. Note though that this condition will almost certainly be indicated by one or more codes that relate directly to the vent valve and/or its control circuit(s).

Nonetheless, some other common causes of code P0455 could include the following-