OBD II fault code P0300 is a generic code that is defined as “Cylinder Misfire Detected Random Cylinders”, and is set when the PCM (Powertrain Control Module) detects either a random misfire on one cylinder, or multiple cylinders that misfire randomly. Note that in this context, “random” refers to misfires that do not occur in a fixed pattern that corresponds to engine speed.

On most applications, the PCM uses the Crankshaft Position Sensor to both generate the ignition sparks, and to serve as a device to monitor the crankshaft’s rotational speed for the purpose of misfire detection.

On a fully functional engine on which there are no misfires present, the crankshaft rotates at a steady rate, since all the cylinders contribute equally to the crankshafts’ rotation. However, a cylinder that misfires does not contribute an equal share of energy, which causes the crankshaft’s rotational speed to fluctuate slightly. If one or more cylinders misfire regularly, the PCM can determine which cylinders are affected by using complex algorithms that in their turn use a reference point on the crankshaft position sensors’ reluctor ring to identify the misfiring cylinder(s).

However, in the case of misfires that occur randomly, the PCM is not able to identify the affected cylinder(s), and in these cases, the PCM will set code P0300 to indicate that randomly occurring misfires are present. Note that on most applications, misfire related codes will be set when the crankshafts’ rotational speed varies by more than about 2 percent within a predetermined time period, which varies somewhat between applications.

Why does code P0300 affect CHEVROLET applications more than others?

Many GM V-type engines use a proprietary technology known as AFM (Active Fuel Management), formerly known as DoD (Displacement on Demand) to deactivate some cylinders in the interests of fuel economy. In practice, this technology depends on valve lifters that consist of two parts that can move independently of each other. In the case of many Chevrolet, and by extension, General Motors V6, and V8 engines, the most common cause of code P0300 is a failure or defect in one or more AFM valve lifters.

As a practical matter, when the engine is in V6 or V8 mode, the two parts of some valve lifters are locked together by a sliding locking pin, and in this state, the valve lifter opens and closes the valves normally. However, when conditions allow, such as when the engine is operating under part loads such as high speed, highway cruising, the PCM directs pressurized engine oil through a dedicated oil control solenoid to unlock the two parts of some valve lifters, typically two opposite cylinders on each bank in the case of V8 engines.

The practical effect of this is that on the unlocked valve lifters, the outer parts of the lifters still follow the camshaft lobes, but since the inner part of the valve lifters (which actuate the pushrods) are no longer locked to the outer parts, the valves on the deactivated cylinders are not opened thereby deactivating those cylinders, which effectively turns a V8 engine into a V4 engine.

When operating conditions demand full power delivery, the process is reversed, and the two sliding parts of the affected valve lifters are locked together again by engaging the sliding locking pin when oil pressure on the locking pin is removed, thus allowing the valve lifters to act on the valves again.

However, when AFM valve lifters fail for whatever reason, the valves on the affected cylinders many not open and/or close fully, thus causing misfires. Note though that in some failure modes, the valve lifter my fail or stick intermittently, which may cause some cylinders to misfire randomly. 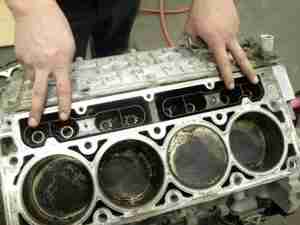 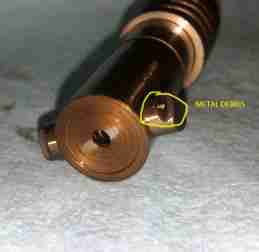 The image above shows some details of the sliding pin mechanism on a lockable valve lifter. Note the circled area that shows the presence of metal wear particles on the sliding pin; in this particular instance the debris prevented the free movement of the sliding pin, which was the root cause of a random misfire on that cylinder.