OBD II fault code P0171 is a generic code that is most commonly defined as “System Too Lean- Bank 1”, and is set on gasoline engines when the PCM (Powertrain Control Module) detects that the air/fuel mixture is too lean. In this context, “lean” refers to a condition where there is too much air relative to fuel in the mixture. As a rule of thumb, an air/fuel mixture is considered ideal when there are 14.7 parts of air to one part of fuel in the mixture. Note that while “Bank 1” in this definition refers to the bank of cylinders that contains cylinder #1, code P0171 also applies to in-line 4 & 6 cylinder engines.

NOTE:  On V-type engines, code P0171 is often accompanied by code P0174, which refers to the same problem, but on Bank 2.  If both these codes are present, the PCM has detected a problem that affects both banks of cylinders.

On all applications, the PCM monitors the quality of the air/fuel mixture on a continuous basis not only to ensure efficient engine operation at all times, but also to improve fuel economy and reduce harmful exhaust emissions. In practice, the PCM uses input data from the oxygen sensors to monitor the amount of oxygen in the exhaust stream, since this value correlates directly with the composition of the air fuel mixture prior to combustion.

As a practical matter however, the PCM uses input data from the MAP/MAF sensor, barometric pressure sensor (where fitted), throttle position sensor, engine speed sensor, intake air temperature sensor, boost pressure sensor (where fitted), and engine coolant sensor, among others, to calculate how much fuel to add to, or subtract from the intake air to achieve an air fuel/mixture that consists of 14.7 parts of air to one part of fuel.

If the engine is in good condition, and there are no exhaust leaks, engine vacuum leaks, or misfires present, all sensors are working as designed, and all oxygen sensors and catalytic converter(s) are in closed-loop operation, the PCM uses input data from the oxygen sensor(s) located upstream of the catalytic converter to alter the pulse widths (ON time) of the fuel injectors. Altering the pulse width of the injectors (as required) has the effect of either adding fuel to the mixture, or subtracting fuel from the mixture to maintain a 14.7: 1 ratio between air and fuel.

If no defects of any kind exist on the engine, the PCM has a limited ability to compensate for slight wear on moving parts of some sensors, as well as for the loss of sensitivity of most sensors that are associated with air/fuel metering to reduce the incidence of false positives. However, in practice, the PCM makes adjustments called “fuel trims” to adjust the fuel mixture several times per second, and when it detects that a lean condition (too much air relative to fuel), exists that it cannot compensate for, it will recognize that it cannot control the air/fuel mixture effectively. When this happens, the PCM will set code P0171, and illuminate a warning light as a result.

Why does code P0171 affect Chevrolet applications more than others?

While code P0171 can, and does, affect all applications with gasoline engines, Chevrolet applications are particularly susceptible to this code. There are various reasons for this, but foremost among them is that for the past 20 years or so, most Chevrolet gasoline engines have had major and persistent issues with engine vacuum leaks that allow unmetered air to enter the engine, thus leaning out the air/fuel mixture.

Prior to about 2010, many Chevrolet engines suffered from poorly designed fuel injectors, a problem that GM was never able to resolve. A typical problem was that fuel injectors clogged up, which affected that volume of fuel that could be injected, which had the direct result that code P0171 was largely inevitable on many, if not most Chevrolet gasoline engines from this era.

There are far too many examples of vacuum leaks on Chevrolet engines to list here, but one engine in particular, the 1.4L gasoline engine fitted to Chevrolet Cruze and related applications deserves a special mention. The valve cover from such an engine is shown below- 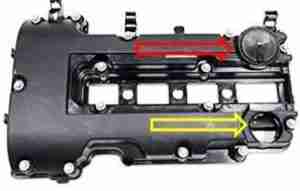 In this image, the red arrow indicates the PCV (Positive Crankcase Ventilation) valve, which is prone to failure without warning, which when it happens, allows unmetered air to enter the engine, thus causing code P0171 to set. The yellow arrow indicates the oil filer cap, which has to be fitted in a very specific way; if this cap leaks, code P0171 is inevitable. Moreover, the seal in the oil filer cap is also known to fail, which is another cause of P0171 on this engine.

Equally problematic are the bolts holding down the entire valve cover. Even if all the bolts are torqued down to specified values, the gasket between the valve cover and the cylinder head is prone to shrinkage and failure, allowing unmetered air to enter the engine, which causes P0171 to set. There is no known, reliable remedy for this issue, except to replace the gasket with an OEM part when it fails.

It should be noted that neither P0171, nor its most closely related code (P0174), are necessarily indicative of oxygen sensor failures/issues. If oxygen sensor issues are present, these will invariably be indicated by codes that relate to one or more oxygen sensors directly. Thus, in the absence of any other codes, the most likely causes of P0171/P0174 will involve engine vacuum leaks.

Nonetheless, some other common causes of code P0171 could include the following-

NOTE: Almost all of the possible causes of code P0171 listed here will be indicated by codes that relate to each possible cause. Thus, if there are no additional codes present (both active and pending), the most likely cause of this code by far is a leak in the engine vacuum system.