OBD II fault code C0031 is a generic code that is defined as “Left Front Wheel Speed Sensor (Sub fault)”, and is set when the PCM (Powertrain Control Module) or other control module such as the ABS control module, detects a problem in the left front wheel sped sensor, or in the wheel speed sensor’s control /signal circuit(s). Note that in some definitions, the term “sub fault” may be replaced by a subset of figures, such as 0031-14 in the case of Honda applications, on which applications the “14” refers to either a short or open circuit in the sensors’ wiring.

NOTE: Be aware though that since the “sub fault” is not always indicated by the definition itself, it is important to refer to the manual for the affected application for details or clarification on the possible causes of code C0031 that are most likely to apply to that application.

The purpose of wheel speed sensors is to supply the PCM and other control modules, such as the ABS module with input data regarding the rotational speed of each individual wheel. Since each road wheel has its own dedicated speed sensor, it is possible for several safety or diver assist systems to use the same data to accomplish several different control functions.

For instance, the ABS system uses the rotational speed of each wheel to calculate effective braking strategies, while at the same time, the traction -, and stability control systems use the same input data to maintain vehicle stability by applying selective braking forces to individual wheels via the ABS system.

In practice, a wheel speed sensor most commonly consists of a Hall-effect sensor and a reluctor ring, exactly like a crankshaft position sensor, but with the exception that the reluctor ring on a wheel speed sensor does not create a reference point. Nonetheless, as the reluctor ring rotates along with the wheel, the teeth on the ring interrupts the magnetic field created by the sensor to produce pulses that the PCM or other control module counts, and converts into a road speed.

Provided that all the road wheels are of the same size/diameter, are all inflated to the correct pressure, and all the wheel speed sensors are fully functional, the input data from all four wheels will be identical if the vehicle travels in a straight line, as indicated by the steering angle-,  and other sensors. However, if a problem exists that causes the speed-reading from one wheel (the left front wheel in this case), to differ from that of the other three wheels beyond a predefined limit while the vehicle is travelling in a straight line, the PCM or other control module will set code C0031, and may also illuminate a warning light.

Note that when this, and other codes relating to wheel speed sensors are present on most applications, normal braking will usually not be affected, but the ABS and other safety systems may be deactivated automatically.

NOTE: Be aware that normal deviations between the rotational speeds of individual wheels will not set this code, since the PCM is programmed to expect deviations such as might occur during cornering, parking, or while other large steering inputs are made during normal operation of the vehicle.

Where is the C0031 sensor located? 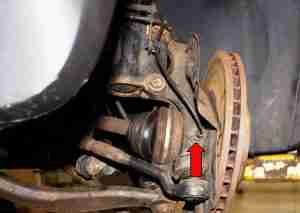 The image above shows the typical location of a front wheel speed sensor. While the wheel speed sensor is often easily accessible such as in this example, gaining access to the reluctor ring for the purposes of inspection or replacement may require removal and disassembly of the wheel hub, and/or removal of the CV joint on front wheel drive applications. Note that on applications where the reluctor ring is located in the wheel bearing itself, replacement of the bearing may be required to resolve this code.

What are the common causes of code C0031?

Some common causes of code C0031 could include the following-