OBD II fault code B2327 is a manufacturer specific code that is defined by Ford, Lincoln, Mazda, Mercury, and Nissan as “Mirror Driver Vertical Feedback Potentiometer Circuit Short to Ground” and on these applications, code B2327 is set when the PCM (Powertrain Control Module) or, Body Control Module, detects a short circuit in an electronically controlled side view mirrors’ feedback loop.

NOTE: In this definition, “Vertical feedback” refers to the circuit that controls the movement of the mirror around the vertical (side-to-side) axis, and “Potentiometer” refers to the device in the mirror that provides the controller with information on the mirrors’ position relative to a base setting.

In practical terms, the adjustment and control of side view mirrors is accomplished by small electric motors that can tilt a mirror either from side to side (vertical axis), or up and down, (horizontal axis), or both at the same time, depending on the application. On many, if not most, applications, the amount of movement is programmable, meaning that one or both mirrors can be programmed to move only within a range set by the programmer.

To enable programming, each drive motor is connected to a potentiometer, which is a type of variable resistor that passes a variable voltage, depending where in its rotation the moving part of the potentiometer (aka, the wiper) stops on a resistive winding or strip. Refer to the image below. 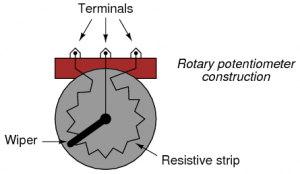 If the wiper is stopped halfway along the resistive strip, the potentiometer will theoretically pass only 50% of the voltage that entered it. Therefore, by moving the wiper to different positions on the resistive strip, the exiting voltage can be adjusted to serve as a sort of baseline reference voltage a controller can use to move a mirror between an upper and lower voltage limit.

Thus, when a mirror is being programmed, the controller will remember both the upper and lower limits of the voltage generated by the potentiometer during the programming procedure. However, during the mirror’s movement, the current that is allowed to pass through the potentiometer also serves as a form of feedback, and the controller will cut power to the actuator when either the previously programmed upper or lower voltage  limit is reached.

In practice, when this feedback voltage is interrupted or absent, the controller cannot control the mirror and code B2327 will be set, which depending on the application, may, or may not trigger a warning light.

The image below shows detail of the mechanics of an electronically adjustable/controlled side view mirror. Note the two drive motors and the potentiometer that is geared to each. Note that each motor controls adjustment of the mirror around one axis. Be aware that while the example shown here is somewhat typical, the actual arrangement and appearance of the various components in an adjustable mirror can differ greatly between applications. 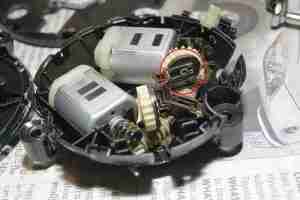 What are the common causes of code B2327?

The most common cause of code B2327 is by far the failure of potentiometers. Other possible causes could include the following-

Apart from a stored trouble code and possibly an illuminated warning light, the most common symptoms of code B2327 is the fact that the mirror may not respond to new programming inputs, nor react to inputs from control units that are already programmed with mirror adjustment settings.

Other possible symptoms, like erratic or unpredictable movements of the mirror are sometimes caused by intermittent faults, which can be extremely challenging and time consuming to find and repair. In extreme cases, it may be necessary to allow the fault to worsen before an accurate diagnosis and definitive repair based on observed symptoms can be made.

How do you troubleshoot code B2327?

WARNING: On some applications, the communication between the mirror and the controller takes place via different parts of the CAN (Controller Area Network) bus system. Diagnosing faults in these systems requires professional grade diagnostic equipment and expert-level knowledge of the application, and for this reason, non-professional mechanics are strongly urged NOT to attempt a diagnosis of this code if the diagnostic/repair procedure involves the CAN bus system in any way.

NOTE 1: When diagnosing code B2327, it is important to consult the manual on the finer points of mirror programming, before embarking on a diagnostic procedure in order to determine whether or not an actual fault condition exists. Side-view mirror control systems are notoriously fickle, and are known to “lose” pre-programmed settings for reasons that are not always apparent. Therefore, it is always a good idea to test the mirror-programming mode on any application that displays this code- failure to do so could result in false diagnoses, and many hours of wasted diagnostic time.

Before starting a diagnosis, consult the manual to get an overview of how the mirror adjustment/programming system works, to get a better understanding of the system. Once you have read the information, attempt to program the affected mirror to see if the system has not lost previously programmed settings. Only proceed to Step 3 if the affected mirror cannot be programmed.

If however the mirror accepts new settings (which is entirely possible), clear the code, and operate the mirror controls multiple times to see if the code returns. If the scanner has control functions, command the mirror through its full range of movement to see if glitches that represent intermittent faults occur.

If the mirror will not accept new settings and the code persists, consult the manual on the correct procedure to gain access to all wiring and controls for the affected mirror. Locate the affected drive motor and its associated potentiometer, and prepare to test the unit.

NOTE: Gaining access to drive motors requires disassembly of the mirror, which can be tricky. In order to avoid damaging the mirror, consult the manual on the correct procedure to disassemble the mirror assembly.

The type of potentiometers used in side view mirrors almost invariably has three terminals, with the centre terminal supplying power to the resistive strip or winding. The other two terminals are connected to the ends of the resistive strip, and a resistance will be displayed if an ohmmeter is connected across the two outer terminals. Note that the measured resistance will depend on where the wiper contacts the strip.

Nonetheless, the purpose of this test is to see if the resistive strip is intact. If it is not, there will be no resistance (open circuit), across the two outer terminals, and hence no feedback current. Consult the manual on the resistance range to use on the multimeter, and place a probe on each of the two outer terminals. If the multimeter indicates an open circuit (no resistance), attempt to move the wiper across the resistive strip to see if there is not just a bad contact between the wiper and the strip at that point.

NOTE: Disconnect the potentiometer from its wiring during this step to get the most accurate result.

In some cases, code B2327 can be set by a low (or high) resistance across the resistive strip, so if a resistance is present, consult the manual on the correct procedure to test the resistance across the full range of the potentiometer’s movement, and compare obtained readings with those stated in the manual. Replace the potentiometer if the measured resistance differs from specified values at any point along the wipers’ full range of movement. Clear all codes after repairs are complete, and operate the mirror controls to see if the code returns. If the mirror works as intended and the code does not immediately return, the repair can be seen as successful.

In the event that the resistance across the resistive strip falls within specified values, consult the manual on the function, color-coding, and routing of all associated wiring, and prepare to perform a thorough visual in section of all wiring and connectors.

Look for damaged, burnt, shorted, disconnected, and corroded wiring and/or connectors. Make repairs as required, clear all codes, and operate the mirror controls to see if the code returns or persists.

If the code persists but there is no visible damage to wiring and connectors, consult the manual on the correct procedure to test all associated wiring for continuity, resistance, and the soundness of ground connections. Be aware though that gaining access to all associated wiring could entail the removal of door panels, carpets, trim panels, and in some cases, even parts of the dashboard.

NOTE: Potentiometer failure is very common, and the steps outlined above will resolve code B2327 nine times out of every ten. However, if the code persists despite having performed all the steps outlined here, the wiser option is to refer the vehicle for professional diagnosis and repair since on some applications, the problem could be deep inside the CAN bus system, or involve one or more other body control modules.

WARNING: Diagnosing any code at this level requires both advanced diagnostic equipment and skills, and it is therefore recommended that non-professional mechanics or non-dealership technicians do NOT attempt a diagnostic procedure and/or repair of this code beyond STEP 8 if they do not have the required equipment, skills, and knowledge.

Note that other definitions of code B2327 exist.

BAT Team Discussions for B2327

None found. Ask a question about B2327.
0 0 votes
Article Rating
Subscribe
Login